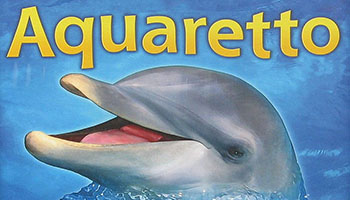 In Aquaretto, the players are managing the planning and selection of animals for their water themed zoo, in the hope of acquiring the most victory points. The players can expand the size of their water park and victory points can be earned in a number of ways. The most common way is to collect a large number of animals to your park in a variety of species.

The core of the game play is the decision to select another random animal from the draw bag to add to one of the transport trucks or to take a truck in play. Taking a truck requires a player to add the animals on their selected truck to their water zoo.

The catch is that animals need their space and thus different species cannot be placed adjacent to one another, there needs to be a separation. This then leads back to how the players decide to place animals on the trucks as they are drawn.

A player cannot afford to create a truck in which one player gets all the animals their park needs, so the aim is to place animals in such a way that a player gets something they want but also take some pain as well.

Aquaretto is a cousin to Zooloretto so there are other cute factors such as allowing animals to breed if a male and a female of a species are acquired, which allows the placement of a baby. There are also coin options that allow a player to do a range of things.

Aquaretto can be played as a stand alone game or used in conjunction with Zooloretto for a mega-game of sorts.

It should be noted that Aquaretto is a slightly more involved experience than Zooloretto, with some more involved options, such as scoring bonuses for acquiring workers that interact with how many fish symbols a player has in their water park. Each player is the owner of a water zoo. Each player tries to lure as many visitors as possible into his water zoo and earns points for the visitors that visit his zoo. To create a zoo that people want to visit, a player must collect animals.

When a player's water zoo is successful, he may want to expand it. When a player's animal basins are full, he must place additional animals into his depot, which loses him points at game end. When a player makes skillful use of his coworkers, he can gain additional points. The player with most points wins. â€¦

Hippopotamus: this herbivore is related to pigs. It is the second largest land animal and can achieve the amazing speed of approximately 30 mph despite its weight, which can reach 10000 pounds and a length of up to 14 feet.

Dolphin: this pleasant mammal is considered by many the most intelligent animal and is particularly noted for its acrobatic ability and its social behavior. The dolphin can dive up to 1500 feet deep for as long as 15 minutes before returning to the surface to breathe. â€¦

Note: this variant is best played by players with experience with both Zooloretto and Aquaretto.

The material from both Aquaretto and Zooloretto basic set is used.

For the preparation, use the following:

Follow all other preparation instructions as written in the rules for both games. That means, each player takes a zoo board, and a zoo expansion board, and a water zoo board, a depot, and 4 expansion boards. With fewer than 5 players, remove the recommended animal tiles from both games. Shuffle the tiles from the two games separately and build separate stacks with them. â€¦