Would You Rather...? Game Rules The aim of the game is to decide between dilemmas, then speculate and vote on the choices of others in a bid to be the first player to make it to the finish space on the game board.

If this is the first time you've played, fit the spinner to the middle of the board. It probably should have come with a diagram, but we're sure you can work it out, it's not that hard. Put the board in a place where everyone can reach it - on top of the fridge or under the couch is not a good idea.

Each player is dealt an 'A' and a 'B' voting card and chooses a mover piece. Everyone places their mover piece on the start position (making sense so far?).

If you're having a party and there's extra players playing the game, improvise and make your own voting cards out of old board games you don't play anymore, and while you're at it, steal the mover pieces too because you'll probably need them as well.

If there's a whole room full of people playing form teams. The teams must collectively decide their choice.

Place the question cards neatly in a pile next to the board. We recommend that if you have any spare parts, such as mover pieces or voting cards left over put them back into the box for safe keeping.

You never know to what lengths your so called friends may go when cheating, even if this is only a light hearted game, it's better to be safe than sorry.

Note: If there's loads of people playing you may like to nominate one player to be the reader - this person does not play in the game, but acts as the host and reads the cards aloud. It's always good to pick an extravert, out of work actor or someone you don't like to do this.

If it's your game you can decide who plays first, or if it' s your house you can decide. Or maybe, you can toss a coin, arm-wrestle, or go a few rounds of 'rock-paper- scissors'.

Whatever method you choose it's likely that someone will get upset, so let's all move on and let them go first. Like we said before, it's all about having fun and no one wants to listen to a cry-baby.

The player who's going first starts the game by spinning the spinner in the middle of the board. Careful now, we don't want those mover pieces flying all over the coffee table. Eventually, the spinner will point to a particular category, it could be - love, powers, fantasy, punishment, curses or pot luck.

This determines the genre of the dilemma you will face. If you're lucky enough for your spin to end up on 'free pick' guess what? you actually get to choose which category you would rather your dilemma be from.

The person to the player's left is the reader. The reader picks up the top card from the pile and reads aloud the dilemma. Each dilemma has an 'A' and a 'B' option.

The player must think carefully and decide what they would do when faced with this choice. In their head they choose either 'A' or 'B', but don't tell anyone what they chose - that would ruin the game! Carefully and discreetly the player places their card in front of them, face down, so no one can see what they have chosen.

Now, all the other players - including the reader (if they are playing - see previous note) think about how well they know the person playing, and decide what they think the player will have chosen.

Did you get that? No one guessed what they answered, they move 3, or anyone who guessed correctly moves 1. Feel free to argue with people over the choices they make, in fact, we would encourage it.

After each card, play moves to the next player who spins the spinner. There are no extra spins, no one moves twice in the same turn, you get nothing for passing the start space and at the end of your turn it' s time to let someone else spin the spinner.

The first player to reach the finish space wins!

If more than one player reaches the finish space at the same time, everyone wins or play another round, or settle it by tossing a coin, an arm-wrestle, or go a fewrounds of ' rock-paper-scissors'... 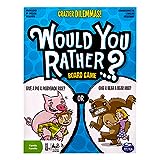 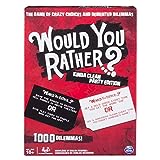