Here's another way to play: the 'Free-For-All' version. Follow the same basic rules as described under Gameplay above, but with this one notable change: you ignore the Bonus Categories. This means: 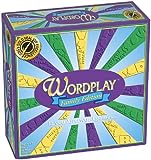 Wordplay for Kids Board Game