Not a trivia buff? It doesn't matter! In Wits & Wagers, each player writes a guess to a question such as "In what year did the bikini swimsuit makes its first appearance?" or "How many feet wide is an NFL football field?" and places it face-up on the betting mat.

Think you know the answer? Bet on your guess. Think you know who the experts are? Bet on their guess. The closest answer--without going over--pays out according to the odds on the betting mat.

Strike it big and you'll be cheering like you just hit the jackpot!

Wits & Wagers is a trivia game that lets you bet on anyone's answer. So you can win by making educated guesses, by playing the odds, or by knowing the interests of your friends. It can be taught in 2 minutes, played in 25 minutes, and accommodates up to 20 people in teams. Not a trivia buff? It doesn't matter! Each player writes down a guess to the same question and places it face-up on the betting mat. Feeling confident? Bet on your guess! Think a friend knows better? Bet on their guess! The player with the most points after 7 questions wins.

Wits & Wagers is most fun with groups of 6 or more people. We recommend playing at holiday parties, family reunions, or any large gathering of friends. Be prepared for light-hearted banter, a little bravado, and a big dose of cheering! â€¦ Wits & Wagers Family gets family members of all ages involved in the fun!

Play individually, or divide into teams if you have 5 or more players. It won't be long before your home is filled with cheers and high-fives!

Gather LOTS of friends - more than 10 is perfect. Split into teams of 2 - 3, move the chairs out of the room, stand around a large table, and get ready to cheer when your team hits the jackpot!

It won't be long before your home is filled with cheers and high-fives! â€¦

Wits & Wagers brings the energy and excitement of Vegas into your home! It's a betting game

where you don't need to know a single answer to win. Anyone can win by betting on other players' guesses. So take some chances, press your luck, and be a Vegas high-roller tonight!

Each player starts with:

Whether you play in teams or as individual players, the rules are the same. So if you're playing in teams, you can substitute the word "team" for the word "player" throughout these rules. â€¦ 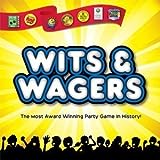 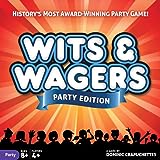 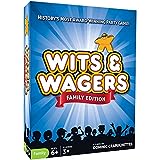