Be the first player to reach the finish space.

Sit the game base on a flat surface and attach the molded figurine by sliding the holes on the figurine onto the pegs on the game base.

Move the ON/OFF switch to the ON position. The green lights on all four whoopee cushion controllers should begin to blink. Each player must push the button on their controller to activate it.

Players place their playing pieces on the "FAART!" space on the game board. Players then conceal their whoopee cushion controllers so other players are unable to see them (see figure 4).

To begin the game, the youngest player presses the start button on the base unit (see figure 5). After 5 seconds, one player's whoopee cushion controller will randomly light up.

That player will be the "Tooter" for this round. The Tooter secretly presses the button on his/her whoopee cushion controller without allowing other players to see.

Players indicate which player they think is the Tooter by placing their noses on the table and pointing them in the direction of the player they suspect (see figure 6).

The player who made the base unit toot points his/ her nose toward another player as well in an effort to mislead the other players. After all players have pointed their noses, all players show their whoopee cushion controllers to reveal who really tooted.

Players continue to play in this manner until one player reaches the finish space.

The first player to reach the finish space is the winner. 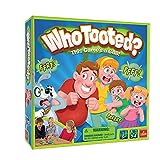 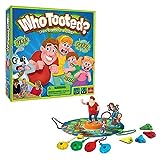