Western Legends is an open-world sandbox tabletop adventure for 2-6 players set in the American Wild West.

Players assume the roles of historical figures of the era, earning their legendary status in a variety of ways: gamble, drive cattle, prospect for gold, rob the bank, fight bandits, pursue stories, become an outlaw, keep the peace.

The possibilities are darn near endless. How will you write your name on the face of history? Western Legends is a "sandbox" game where players take on the roles of historical figures from the Wild West. Through a number of means in the game, players will earn Legendary points (LP).

Some players will become outlaws, collecting Wanted points for robbing the bank, rustling cattle, and stealing from other players.

Others will follow the path of the Law, earning Marshal points for fighting bandits, wrangling cattle, and arresting Wanted players. Only one thing is for certain: history only remembers the most legendary. â€¦

Purchasing and upgrading weapons is a great way to gain an edge when fighting. The Wild West is a dangerous place, so every advantage you can gain is one worth having.

Poker cards are vital in Western Legends. Use high value cards to win fights. Bonus effects on cards like Cheat and Lady Luck are better suited to help you win at poker.

The bonus and reaction effects on cards like Shootout and Stick 'Em Up can make an Ace played against you less potent. Don't fight if you likely won't win. â€¦

For the 2 player version of the game, players will use the Man in Black deck, which is comprised of 10 action cards and 1 rules/setup card.

Game play remains the same, with players fighting to obtain the most LP. However, the Man in Black is also trying to win the game!

Goal cards provide players with additional challenges and rewards in the form of legendary tokens. When playing with this variant, add the following steps to set up: â€¦ 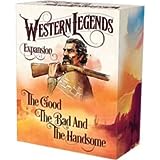 Western Legends - The Good The Bad The Handsome Expansion