Decide on a gameplay option - open season or legit. Divide into teams of two. If there is an odd number of players, there can be one team of three.

Each team will take turns having 60 seconds to interpret as many phrases as possible.

On each team, one player is a reader and the other is an interpreter. (the person who has gone longest w/o brushing their teeth goes first) The Reader places a Mouth Opener in his or her mouth and is the only one to look at the screen.

When ready, the timer is started. The Reader reads the word or phrase on the screen to the Interpreter. The Interpreter must correctly guess and repeat what the Reader is saying.

The Interpreter must state the phrase exactly as it is written on the card. Other teams reserve the right to see the card and verify accuracy.

One point is awarded for each correct interpretation. A team cannot pass on a card - unless it is a Bonus Card.

Bonus Cards are more difficult and are worth 2 points. These are the only cards the Reader or Interpreter may pass on.

The team with the most points after four rounds wins!

If there's a tie, keep playing rounds until one team has more points.

The Reader may use general gestures, sounds, and other references. But, no drawing, writing, or illustrating allowed

The Reader cannot give hints of any type - only speaking the phrases and nodding "yes" and "no".

ALL players split into 2 teams total. Now each team has one READER per turn and the rest of the team players are all interpreters Use the same rules as above.

Each round a new reader is chosen by popular vote, try to avoid a reader going twice. 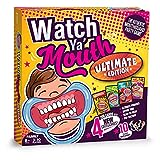