Each player or partnership will have their own deck. the more players, the more Wackee the game can get.

Note: If more than 6 players, play in in partners of two, each partnership shares a deck. If you have an odd player, don't kick them out; select one of the faster single players to take on the "Wackee Challenge" by opposing the other partnerships by themselves.

To be the first player to 'Go Out' and call "Wackee Six!" by playing out all of the main 12 cards that were originally dealt to you, And to get as many points as possible by playing the most cards from your remaining deck out into the many piles in the middle of the table or playing field.

The play of the game gets really "Wackee" because no one takes "turns", everyone just plays at once.

Shuffle the cards thoroughly. Each player will deal 12 cards to themselves. 6 cards will be side by side and placed face up, and 6 cards placed in a single pile face down (you may not look at these face down cards until they are turned over one at a time during the game.

That would be cheating). The rest of the deck remains in the player's hand, also face down.

When the cards have been dealt and everyone is ready, a chosen player says "Let's get Wackee!" and everyone begins to play at once. (This game will really develop speed of thought and coordination skills).

What to do First?

You want to find a number 1 card to get piles started out in the middle. Look first at the 6 face up cards in front of you. If a number 1 card is showing, play it out anywhere in the middle fast! Once a pile is started by anyone, everyone can then play on that pile. You always want to play from your original 12 cards first.

You are only allowed to play blue on blue, green on green etc.. These piles can only be built upwards not downwards, and must only go up in sequence by one number at a time.

From 1 to 2 then 3 then 4, 5, 6 and so on up to 13. Once the 13 has been played the pile is considered "Wacked", or completed, and is ignored until the end of the game when each card will be counted for points.

"Wacked" piles can or should be set aside for the playing field to create more room if needed.

Remember that as soon as you have played one of your 6 face-up cards, immediately turn over a card from the face- down pile of 6 to replace it with so that you always have 6 cards face up.

Note: Wild cards may not be used as 1's, but may be used in the middle of the table to represent any other number of any color. Turning the wild sideways allows other players to still see the number and they then become the top card.

Handling the rest of the deck in your hand: You or your must turn over three cards at a time from the face down deck (1-2-3 turn over, 1-2-3 turn over) and only the top card of the three is eligible for play in the center of the table.

However, once you play that top card of the three, you can then, in sequence, play the next and the next because they in become the top card.

If the top card can not be played out in the center, then continue turning over the next three and the next as fast as your can so that you eventually get to a card you can play.

You play on any of the piles in the center it does not need to be a pile your personally started. Play as fast as you can, because each card you play in the center will later be counted as a single point.

You can not play a card from your deck to replace one of your 6 face up cards on the table as that would defeat the purpose of the game, so only play to the middle of the table from your deck.

As soon as you get to the end of your deck, take the top card off and place it on the bottom, flip the deck over and start to go through the deck gain, three cads at a time (Switching assures that you get a better mix of the cards).

When Playing as Partners

One partner only turns over cards in the deck three at a time, while the other partner handles the 12 main cards originally dealt. Be sure to remind your partner which cards you are looking for to help you play out your 6 main face cards.


In case of a tie

If two or more players seem to have played a card on the pile at the same time, do not hurt each other arguing and do not pout, the card that is on the very bottom wins.

If your card is under the other's legitimately then you get to keep it there and the other players must take back their cards and try again for another pile.

The moment, yes the very instant you have played all 12 of the main card dealt to you, say "Wackee Six!" and the playing stops. NO MORE CARDS CAN BE PLAYED!

Only the cards that have become airborne prior to hearing "Wackee Six!" will count. Cards that you sneak in later do not count and must be taken back. Don't be surprised if the game is so exciting that you yell "Wackee Six!"

Important: For scoring purposes, do not mix any cards together until everything is sorted out. Your own remaining deck stays out of the mix.

Also be sure you count how many of your 12 main cards are left un-played or else other players will be mad because they count against you.

Each of the 12 main cards, left from the original deal, will count as 2 points against you. Turn over all of the cards played out in the middle of the table and separate them back into the original colored decks and return to each player their played cards.

Count the cards you played out as one point each then subtract the points you have against you and report your score to the score keeper.

Bonus: There is a 10-point bonus each round for the player/partnership who was first to go out by saying "Wackee Six!"

The game continues as long as you wish, with new cards dealt, until one person or partner has reached an agreed-upon target score. 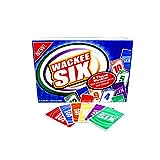