Valley of the Kings Game Rules Players are Egyptian nobles at the time of the pharaohs, preparing for their death and burial in the Valley of the Kings. In the Egyptian religion, when you die you can take it with you.

Egyptians, therefore, stocked their tombs with food, canopic jars (for storing their organs), weapons, works of art, and jewelry. They hired architects, engineers, and masons to build their tombs.

You can play with any of the versions of Valley of the Kings (base game, Afterlife, or Last Rites) or you may mix cards from different versions for more variety.


The premium edition of Valley of the Kings includes all three previously released versions:

It also includes many extras that enhance play, such as pharaoh cards, additional unique cards, and deluxe components.

Fill your tomb with the most valuable items.

These cards represent the various statues, weapons, artisans, etc. players try to accumulate during the game.

A Card Title: The name of the card.

B Gold Value & Card Type: The gold value is used for buying other cards. The scarab in the upper left hand corner also identifies the card type (jade scarab for set cards, and a crystal scarab for starter and unique cards).

C Cost: The gold cost of the card. Additionally, each type of card set (starter, Weapons, etc). can be easily recognized by it's gem color. The gem's shape indicates which version the cards are from (base game, Afterlife, or Last Rites).

D Set Name & Color: Each type of card (starter, Weapons, etc). has its own color so that color sets can be easily recognized. Starter and unique cards have a number in parentheses indicating the number of victory points the card is worth. The color of the gem in the upper right can also be used to identify the set.

E Action: The action on the card can be executed instead of using the card for its gold value.

F Historical Text: This text features a story or historical information regarding the subject of the card.

G Set Icon & Quantity: Each set is represented by a different icon. For color sets, the number of different cards in the set is overlaid on the icon.

H Level: Levels are used to sort cards into stacks during setup.

The starting player takes the first turn of the game, then play continues clockwise around the table. Players continue taking turns until the end of the game.

During your turn you must follow these four steps in order:

After you have completed each step, the next player clockwise around the table takes their turn.

When a card crumbles down, it may also leave an empty space that needs to be filled by the card at the top of the pyramid, causing another card to crumble down.

The bottom middle card of the pyramid (Middle Sarcophagus) is removed, causing the pyramid to immediately crumble.

The Heart Scarab Amulet in the top row then crumbles down to fill the empty space that the Statue of Bastet left.

You may buy any number of cards during your turn that you can afford.

To buy a card you must follow these three steps in order:

When a card is played for its gold value, you cannot use its action. Do not discard the cards you used for gold. They remain on the table as part of your cards in play until the end of your turn.

Jay chooses to buy the Statue of Bastet which has a cost of 4.

This provides a total gold value of 5 which is sufficient to buy the Statue of Bastet. Note that the 1 extra gold value is lost and does not count towards an additional purchase.

Place your card face up on the table and carry out its action. If a card has more than one part to its action, you must complete all parts. Furthermore, you must execute the parts in order, completing one part before you move on to the next.

If one of the parts cannot be executed (for example, because a required card is not available), you may not execute the action. Exception: When "may" occurs in the text of an action, you are not required to perform that part of the action.

Once per turn you may put a card from your hand into your tomb. Some actions allow you to put additional cards into your tomb. When a card is entombed, you cannot use its gold value or action.

The cards put in your tomb are public knowledge. Lay out your tomb as shown in the example image below so that all players know what cards you have. Remember that only the cards in your tomb will score at the end of the game!

The game continues until all of the following conditions have been met:

There are three types of cards: starter cards (gray cards such as Urns and Menials), uniques (purple cards such as Astrologer, Mummified Cat, and Calcite Cup), and sets (cards in various color sets, such as Sarcophagi in red, Weapons in green, and Builders in blue).

Scoring of starter cards and uniques is easy - just add up the victory points listed on the cards.

For color sets, determine how many different cards in each set you have (duplicate cards are worthless) and square the result (multiply the result by itself). For example, if you have 6 different kinds of tomb Art, you score 6x6 = 36 points. Add up all your points.

Jay has the following cards in his tomb: 3 Menials (1 VP each), a Carpenter, 2 Priests of Thoth, and a Priest of Sobek.

His total is 8 points. Note that the extra Priest of Thoth is worthless. 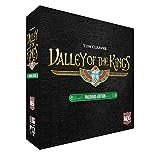 Valley of The Kings: Premium Edition

Valley of The Kings

Valley of The Kings: Afterlife