Resources are crucial to your success. They allow you to stay alive and fight monsters. Encounter cards, skill cards, and weapon cards allow you to exchange certain resources for other types. Here are the resources you can find:

Effort is the most important resource. It is a measure of your life force, stamina, and determination. It is used to pay for most of your actions and, most importantly, to inflict wounds on monsters. There are three categories of effort: small, medium, and large. Each category is a distinct resource and is spent independently.


However, you can spend effort of a higher category in place of effort of a lower category, if needed. To do so would be a desperate measure, but might just save your life!

Not all problems are solved with brute force. Some obstacles will require a smarter, craftier approach. Cunning is a representation of how inventive and sneaky you can be. Cunning is a resource that you use to learn more about your foes and to trick them without fighting.

Revenge is hungry work! Effort you spend will tax your body. At the end of every level, you will need to eat something - not being able to do so will sap you of much needed strength, and you could even die of starvation.

You will not last long fighting with your bare hands. But crafting weapons requires materials: wood and metal. Skills you acquire along the way might also help you find new - often violent - uses for these two resources.

Ah yes, the purpose of your original expedition! You will seldom find it useful down in the depths, but if you emerge alive, treasure yields the most points in calculating how impressive your unlikely victory was.

On each level, you only have so much time to spend preparing and exploring before the monster becomes aware of you and attacks. Each encounter carries a time cost, and some actions do too, bringing you closer to the inevitable combat.

You can never have more of any resource than the corresponding resource bar has space for; if you would gain more, the excess is lost.

Character sheets contain information about abilities specific to the character you are playing. Only one character card will be in play for any given game.

Weapon sheets allow you to spend effort to break armor and inflict wounds, helping you defeat monsters. You can only have one weapon in play at a time.

Monster sheets represent the enemies that you encounter in the catacombs. They are split into four levels, with higher levels having more difficult monsters.

Encounter cards represent the encounters that you have during your travels and offer opportunities to obtain or exchange resources.

Skill cards are usually obtained after victories in combat and offer additional abilities to help you on your quest. There is no limit on how many skill cards you can have.

Condition cards indicate temporary effects that apply to your character. These cards only come into play through combat with monsters, and are usually negative.

In addition, the reference sheet, time/monster tracker and effort/resource tracker will comprise your display and are used to track information during the game.

You will face four different monsters (one per level) over the course of the game, and each successive monster is harder to defeat than the previous one. Each monster has several statistics listed on their sheet:

A measure of monster's toughness, which indicates how many wounds you must inflict with your attacks in order to defeat them. Use your weapons and skills - these offer a way to convert effort (and sometimes other resources) into powerful attacks that inflict wounds.

Certain monsters are well protected, and you will have to break their armor before you can inflict any wounds. Some weapons are more efficient than others at breaking armor. Certain skills allow you to bypass armor altogether.

This is a negative effect that occurs if you were ambushed by the monster due to running out of time in the Travel Phase. Try to avoid being ambushed!

You can spend the listed resources in order to trick the monster and escape the level without engaging them in combat. Some monsters (including all of the level IV monsters) cannot be bypassed with trickery, however.

Certain monsters have a special effect that introduces new rules for combat, sometimes even new actions available to you during the battle.

When it is the monster's turn to attack in combat, the six-sided die is rolled to determine the result of their attack. Consult the combat actions table after each roll, then apply the corresponding effect.

If you defeat the monster in combat, you gain the rewards listed here. If you bypass a monster with trickery, you do NOT gain these rewards. 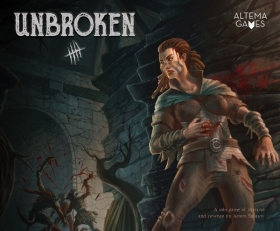