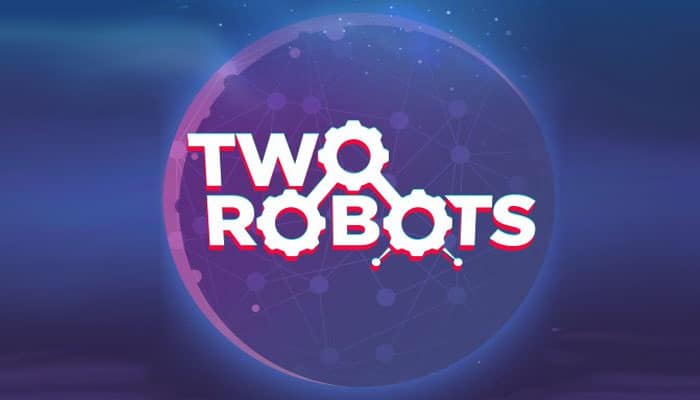 In Two Robots, you take on the role of one of the five Salvagers. Your objective is to claim Rennova as your own. To do this, you can do one of two things. First, you may build two robots: one to keep up the fight and the other to maintain the factory to build more troops.

Second, you can simply defeat all the other Salvagers in battle with your first robot and Rennova will be yours.

Build Two Robots. Or, be the last surviving player.

The game plays counter-clockwise. Robots don't like to do things the same way as humans. The ideal turn order:

This will vary based on the number of players. For example, if only Scavenger and Apocalypse are playing, Scavenger would go first.

Players draw cards from the Action deck, which can be one of three different types:

Robot Parts ("Part cards"): Play these in your Factory to build your robots.

Attack: Play these on your opponents to gain an advantage. All Attack cards can be interrupted by Homing Missiles.

If there are no more cards in the Action deck, shuffle the discard pile and replenish it.

These are the Part cards you will use to build Two Robots.

Each Part card contains one part of the robot which is highlighted on the card and has a matching icon on the top right of the card.

On the bottom of each Part card is either 1 or 2 Energy types. A Part card with only 1 Energy type, like the one above, is called a Core Part card.

Part cards with 2 Energy types are called Hybrid Part cards. The background color of each Core or Hybrid corresponds to its energy (or energies) to help with easy identification.

Players play their Part cards on top of each other in 5 distinct Stacks inside their Factory, 1 Stack for each of the 5 Energy types: Chemical, Electrical, Mechanical, Nuclear, and Solar. They cannot play Part cards inside an enemy Factory.

Below are some important rules regarding a Stack of Part cards:


Example: Liz has a Stack with a Chemical Part card on top of a Chemical/Solar Hybrid Part card. This means this is a Chemical Energy Stack.

If she tries to start a new Stack with another Chemical/Solar Part card, that new Stack automatically becomes a Solar Stack.

Duplicate Parts in a Stack

The Stack to the left is a Chemical Stack. Since this player decided to play another ARMS Part card, they should place it horizontally so that it is easy for everyone to see.

Duplicate Part cards in the same Stack can actually be very helpful during the Event Phase.

An Active Robot is complete when a Stack contains at least one of each of these Part cards:

These parts do not need to be in any particular order to successfully build an Active Robot!

Attack and Defense cards can only be played if you meet the requirement for the minimum number of unique Stacks. The number of Stacks required to play the card is the gold number at the top left of the card.

After playing any Attack or Defense card, place it in the discard pile.

Tip: A Hybrid sitting alone in a Stack still counts as a unique Stack, even though the player may not have chosen the Energy type of the Stack yet.

Sometimes you will have to make the difficult decision of whether to create a new Stack so you can play more Attack and Defense cards, OR continue stacking and building your robots.

Some Attack cards allow you to destroy Part cards based on their Energy type. These parts can be inside any Factory, anywhere, within any Stack, and only need to match one of the Energies if it is a Hybrid Part card.

Space Pod allows you to steal a Part from any opponent's Factory and immediately play it in your own. You may even steal a Part card from an Active Robot!

The Nuclear Stack to the left is considered frozen.

Once an Ice Blast card is played, it is placed on top of the Stack. That Stack is now considered frozen. The player who owns the Stack can no longer play Part cards onto the stack until it is unfrozen. Frozen Stacks can be unfrozen with a Rescue Drill Defense card.

All frozen Stacks still count towards the following:


Parts already inside of a frozen Stack:

Homing Missiles can be played when an enemy is attempting to mess with the Robot Parts in your Factory using an Attack card.

You cannot use it to prevent a player from playing Robot Dart cards, and it cannot be used to counter Sentry Gunship.

Homing Missiles can be played when it is not your turn.

If you also have a Homing Missiles card, you can use it to cancel an opponent's Homing Missiles and still proceed with your Attack, but this will count as one of your actions.

Sentry Gunship cancels any Event card only during an opponent's Event Phase. This applies to both Power cards and Active robot cards. Sentry Gunship cannot be interrupted by any other Defense card.

During your Event Phase, you may trigger one of two types of Event cards:

Discard down to the hand limit.

You win the game if you build two Robots or if you are the last surviving player.