Players take turns controlling Trogdor as he burninates the countryside and dodges the wrath of his adversaries. To win the game, you must accomplish all of the following:

In so doing, you shall bring joy and satisfaction to your fellow Keepers of Trogdor, as well as the mysterious wingaling dragon hisself. But beware, for if Trogdor takes too much damage before achieving victory, the players lose the game.

Below are all the game components and brief instructions for setting up. More details on each component are given later.

Before Starting The First Turn, Give Each Player One Keeper, One Item, And One Action Card.

Keepers of Trogdor give you a unique special ability, as well as a sense of belonging.

Keeper powers are always active, but are effective on your turn only unless otherwise stated. Give each player one randomly or let players choose their favorites.

Items of the Keepers of Trogdor give you an additional special ability. Unlike the Keeper abilities which are always active, item abilities must be recharged before they can be used again.

Unless your item says otherwise, it can be used only once on each of your turns and recharged only on your turn. When you use your item, turn it sideways to show that it can't be used until it is recharged.

To recharge the item, you must satisfy the recharge condition on the item on your turn, then you may turn the item back to its original position.

Distribute these the same way as the Keepers.

Trogdor Action cards give you Action Points (AP) and a special ability that you can use for this turn. These special abilities may break the rules as you understand them, so do what the card says over any other rule in this book.

After playing it, discard that Action card, and keep any others you have.

Determine randomly who will go first. You can do this alphabetically by Keeper, or by drawing straws, throwing darts, or pitching pennies.

Your turn consists of two phases. In the first phase, you control Trogdor and wreak havoc upon the lands. In the second phase, the lands fight back, and all the board elements do their thing.

Start by drawing an Action card from the Action Deck and placing it beside your current one. If it is a Troghammer card, then draw another Action card.

If the Action Deck runs out of cards, don't reshuffle it.

Choose one of your two Action cards and play it, then discard it. If you don't like either of your Action cards, discard one to gain 5 AP with no special ability.


Step 3: Use your action points

Spend an Action Point to Move, Chomp, Burrow, or Hide.

Trogdor can spend an Action Point to burninate an unburninated Tile, Cottage, or Peasant.

A Cottage can only be burninated if its own tile and all surrounding tiles, including diagonally adjacent tiles, are burninated. Flip the Cottage over to its burninated side.

Action cards that let you burninate a tile other than the one where Trogdor is standing ignore the usual burninating restrictions (for example, the Lake tile can be burninated regardless of the condition of its neighbors).

However, these cards apply only to tiles (not Cottages or Peasants) unless they say otherwise.

When Trogdor burninates a Peasant, or if a Peasant walks into a tile that contains a burninated Cottage, that Peasant will immediately catch fire and run around igniting things, but will then go into the Void!

When a Peasant burninates,
start by crowning him with the Flame Helmet.

This is an important part of the ceremony, do not skip it.

Draw a card from the Movement Deck and use the movement path on the right (not the Peasant arrow). The flaming Peasant moves along that path, burninating every tile along the way if able (including its starting tile).

If the flaming peasant runs into the lake
(whether the Lake tile is burninated or not), the Peasant's fiery struggle ends, and he survives! (The flaming Peasant doesn't ignite an unburninated Lake tile).

If the flaming peasant runs into a tile with a cottage

If the flaming peasant runs into a tile with another peasant


that Peasant also burninates! This is true even if they both started on the same tile. Turn any subsequently burninated Peasant on his side.

When the previous Peasant is done with his Spree of burnination, pop the other back up and crown him with the Flame Helmet.

Draw a different movement path for each flaming Peasant, and finish dealing with the first burninated Peasant before the next one starts running.

After burninating, unless saved by the Lake, a burninated Peasant goes to the Void.

The denizens of Peasantry will not go down without a fight, and Trogdor would have it no other way. In the second phase of the turn, various board elements will take automatic actions, as described by a single card.

If you controlled Trogdor in Phase One, it is still your turn, so all the rules in Phase Two apply to you.

All enemies have "wraparound" movement, which means that if they move off the board, they return on the opposite side.

To begin Phase Two, draw a card from the Movement Deck.

Sometimes the board wants more Peasants. Count the

in the upper left corner of the Movement card. If the board already has at least this many Peasants, then it is satisfied. If not, move Peasants from the Trog-Meter to unburninated Cottages until the board is satisfied.

The Peasants arrow in the lower left of the Movement card shows a compass direction. Move all Peasants one step in that direction.

Peasants Repair Tiles: If the Peasants arrow says "Move & Repair", then the Peasants also unburninate any burninated tiles they stop on.

The Knights (including the Troghammer, if he is in play) use the movement path on the right side of the card. They all technically move at the same time, but move them one at a time to keep it simple.

Knights Repair Cottages: If a Knight starts on, moves through, or stops on a tile with a burninated Cottage, the Knight repairs that Cottage to its unburninated state.

Knights Damage Trogdor: If a Knight enters Trogdor's tile, or vice versa, Trogdor takes one point of damage. Move one Peasant from the Trog-Meter onto the Void. If the Trog-Meter has no Peasants left when you try to remove a Peasant, the damage defeats him.

If a Knight starts on the same tile as Trogdor, the damage was already done when they met, so it doesn't happen again.

If Trogdor is hiding or has some sort of damage prevention against Knights, he takes no damage from the Knights.

Next, the Archer moves and shoots, using the same movement path as the Knights. The Archer doesn't damage Trogdor by entering his tile, but instead fires arrows, forward and backward, in the direction of the Archer's last step.

For example, if the Archer's last step is East, then the Archer fires arrows East and West, and Trogdor takes one point of damage if he's in that path.

The arrows' path does not include the Archer's tile.

If Trogdor is hiding or has some sort of damage prevention against the Archer, he takes no damage from the Archer.

The turn passes to the player on your left.


The Troghammer is a third knight, way cooler looking than the first two, who has the ability to move during BOTH phases of your turn.

The Troghammer cards should be removed from the Action Deck at the start of the game. Shuffle them into the deck the first time Trogdor takes damage after getting hit by a Knight or Archer.

If you draw more than one Troghammer card on the same turn, you move the Troghammer each time.

The Troghammer moves any time his card is drawn from the Action Deck and also whenever the other Knights do.

To move the Troghammer, draw a card from the Movement Deck and use its movement path, then ignore the rest of this card and discard it. If he spawns on or stops on a tile with a Knight or Archer, move him again!

Trogdor starts with four Peasants on his Trog-Meter, representing his health. If Trogdor chomps a Peasant, he gains health! Move that Peasant from the board to the Trog-Meter.

When Trogdor takes damage, move one Peasant from the Trog-Meter to the Void. If the Troghammer cards are still set aside, shuffle them in.

Losing a Peasant when it spawns onto the board is not damage, so the effects that are triggered by damage (such as shuffling the Troghammer cards into the deck) are not triggered when a Peasant spawns.

If Trogdor's health drops to zero, he's not quite defeated, but if he takes another point of damage while already at zero, then it's over!

Even in defeat, Trogdor rages out with magnificent glory, laying waste to everything he can before stomping off the board in frustration. Troggie doesn't lose games, he rage-quits!

If Trogdor is defeated, draw five Movement cards for Trogdor, and move him along those five movement paths in order, burninating his starting tile and everything he touches!

During his spree of fiery rage, Trogdor gains wraparound movement as he burninates Cottages, Peasants, and tiles just by walking onto them.

Cottages and the Lake do not have to qualify, and Peasants are erased upon impact without burninating anything else. Heck, so are Knights. (But the Archer lives!)

Should Trogdor's Fiery Rage succeed in burninating all the tiles, Cottages, and Peasants, you gain a total table-flip victory, which is more spectacular than a regular victory by a factor of ten.

No matter the outcome, every game should end with everyone shouting a rousing "IT'S OVER!!" in unison.

Cottage Tiles: Cottage tiles contain Cottages. Trogdor can burninate the tile like any other tile, but the Cottage can't be burninated unless every surrounding tile is burninated, including diagonally adjacent tiles and the Cottage tile itself.

This requirement does not "wrap around", so a Cottage at the edge of the board is easier to burn than one in the center.

If a tile next to a burninated Cottage becomes unburninated, this doesn't repair the Cottage, but it does make it harder to re-ignite.

Mountains: Mountains give Trogdor the ability to hide. As his last Action in a phase, Trogdor can hide in a Mountain and become invulnerable to Knight and Archer damage for the rest of the turn.

Lay Trogdor down to show that he is hiding.

Tunnels: Tunnels give Trogdor the ability to move from one Tunnel to the other for one Action Point.

When designing your own boards, place the Tunnels far apart!

Lake: The Lake is harder to burn than other tiles. Trogdor cannot burninate the Lake unless all the tiles it shares an edge with are burninated.

This doesn't include the diagonal tiles, so it requires the burnination of up to four adjacent tiles (fewer if it is on an edge).

The Lake can also prevent a Peasant from burninating to death. It has this power whether or not the Lake itself is burninated.

Flowers, Forests, Stumps, and Trees: These typically don't do anything, but some cards might refer to them.

Empty Tiles: Some cards talk about "empty" tiles. These are tiles that contain no pieces (Knights, Troghammer, Archer, Peasants, Cottages, and Trogdor).

All tiles retain their abilities even when burninated.

The game can end either in triumph or defeat. That's because even if he is defeated, Trogdor gets one last chance to snatch victory from the jaws of defeat.

Trogdor's Keepers are victorious if the following conditions are ever met at the same time:

Trogdor is defeated if he takes damage from a Knight or Archer when he is already at zero health, or all players have no Action cards. Then the game is over. 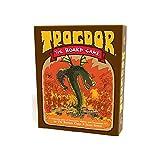