You and your opponents are raucous raccoons, tipping over trash cans for food and shiny objects. Push your luck to acquire more cards from the trash, but you must stash them in order for them to score at the end of the game.

When the deck runs out, everyone reveals their stashed cards. Score points based on who has the majority for each card type. Whoever has the most points wins.

Cards Most cards provide points at the end of the game when they are stashed. The icons in the upper left corner show how many points are scored for 1st place, 2nd place, and 3rd place, based on who has the majority of that type of card.

Each card also has an action at the bottom that you may use instead of stashing. (See the Card Guide on the back for specific information about each card's ability). To activate an action, discard the card face up next to the trash can, (the discard pile is open information), and then perform the action listed on the card. You may play any number of actions on your turn.

The "protect" and "steal" actions on the Doggo and Kitteh cards are used on another player's turn, and only if you are the target of a Steal action. There is no limit to the number of cards you may have in your hand or your stash.

The player with the fewest cards in hand starts the game and play passes to the left. On your turn, follow this sequence in order:

Roll the die and take the token that ' matches the die result from the middle.

Then decide to either STOP or CONTINUE rolling. If you decide to stop, move to Resolve Tokens.

If you continue, roll the die again and take the token that matches that roll result. However, if the die result ever matches a token you have already taken, you BUST and do not resolve ANY tokens. Place any collected tokens back in the middle and play passes to the left.

Note: You may save yourself from busting by discarding a Blammo! card to re-roll, and/or possibly change the result by discarding a Nanners card to ignore the last roll (if you have one).

Consolation Prize: If you bust, draw one card from the trash can into your hand.

Bonus: If you manage to collect all six tokens, go immediately to Resolve Tokens, and then take a bonus turn. With this bonus turn, however, you are limited to collecting a maximum of three tokens.

For the sake of the game end, this is still considered to be the same turn. Even with no cards available, you will be able to roll the die to try for stash or steal functions.

Once you choose to stop rolling, you may then resolve each of the tokens you have collected in any order.

Place each token back in the middle as you resolve it. Once you have resolved your tokens, your turn ends. Pass the die to the next player.

Once the last trash can card is drawn, the current player finishes their turn and the game ends. All players then discard any cards remaining in their hands, reveal stashed cards, and sort them by type.

Add up the total number of cards per type and compare with opponents. Score points based on who stashed the most, according to the icons in the upper left corner of each card.

Note: You must have at least one card of a type in order to score any points for it. For example, if you have the most Feesh cards, score five points.

If there is a tie, the players involved in the tie receive one fewer point. For example, if two players tie for the majority of Feesh cards, both score four points instead of five.

The player with the next most Feesh cards would move to second place and score three points because of the tie for first.

Score one point for each Blammo! card stashed.

Count up and compare points - whoever has the most wins. 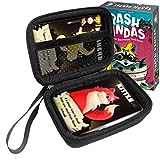