Players are divided into teams of British and French pirates. In games with an odd number of players, there will also be a Dutch pirate. You will begin the game on either the Flying Dutchman or the Jolly Roger, but the other players on your ship will not necessarily be on your team.

During the game you will use Vote cards to participate in Attacks to get treasure from the Spanish Galleon, in Mutinies to maroon selfish captains, and in Brawls to control the two pieces of treasure on Tortuga.

You will also view, reveal, and force other players to reveal Event cards in order to help your friends and harm your enemies. When the Spanish Armada Event card is revealed, the team (French or British) with the most treasure wins the game.

Treasure in both ships' holds and in the French and British areas on Tortuga are added together. In games with an odd number of players, if teams are tied when the Spanish Armada card is revealed, the Dutch player wins.

In this example, if the Spanish Armada was revealed the French would win since they have 5 total treasures (3 on the Jolly Roger, and 2 on Tortuga), and the British only have 3 (2 on the Flying Dutchman, and 1 on the Jolly Roger.

Whenever your pawn is at the back of the line on a ship, regardless of the number of pawns on that ship, you are that ship's Cabin Boy.

There may never be more than 5 pawns on a ship. Whenever your pawn is the highest-ranking pawn on Tortuga, you are the Governor of Tortuga.

On your turn, you must perform any 1 action. You must state which action you are going to use before using it.

These actions are also listed on the back of your Brethren of the Coast cards.

Note: In 2-player games, each player gets to per- form 2 actions on each turn.

Players can choose one of the following actions to complete on their turn.

Secretly view the front of any 2 of the 5 face-down Event cards. After viewing, place them both back in their same positions face-down.

Flip over any 1 of the 5 face-down Event cards. Reveal this card to all players and resolve the consequences listed on the card. Replace the revealed card with the top card from the Event deck face-down.


Force another player to choose between 2 Event cards

The other Event card remains in its position unseen. Replace the revealed card with the top card from the Event deck face-down.


Move to or from a Rowboat

Call for an Attack


Maroon any crewmate to Tortuga

Maroon any other pawn on your ship to Tortuga. You may not maroon yourself.

Call for a Mutiny

Call for a Brawl

Brawls move the 2 pieces of treasure already on Tortuga to one or both treasure areas on Tortuga. See "Vote Cards" section for details.

Attacks, Mutinies, and Brawls are all types of Votes. When a Vote is called for, all players participating in the Vote will put 1 of their Vote cards face-down into the middle.

For each type of Vote, the top Vote card from the Vote deck is also placed face-down in the middle. All cards in the middle are then shuffled and revealed, and the result of the Vote is carried out.

Only the top section of the Vote card matters in an Attack and contains a Cannon, a Torch, or Water. Every 1 Water cancels out 1 Torch. If there is at least 1 Cannon, and at least 1 "successful" Torch played in the Vote, the Captain may take 1 piece of treasure from the Spanish Galleon and place it in either hold on his ship.

If the Spanish Galleon is out of treasure the Captain may take 1 piece of treasure from either treasure hold on the other pirate ship (Flying Dutchman or Jolly Roger), even if the other ship has no pawns on it, and place it in either hold on his ship.


Example: If 2 Cannons, 1 Torch, and 1 Water were played, the attack would fail since the Water cancelled the Torch and there were no "successful" Torches.


Example: If 1 Cannon, 2 Torches, and 1 Water were played, the attack would succeed since there is 1 Cannon and only 1 of the Torches was cancelled by water, thus leaving 1 "successful" Torch.


Example: If 2 Cannons and 2 Torches were played, the attack would succeed. However, you still only take 1 piece of treasure.

Only the middle section of the Vote card matters in a Brawl and contains either a British flag or a French flag. If a majority of the revealed cards are British flags, place both pieces of treasure on Tortuga in the British treasure area.

The First Mate of a ship may call for a Mutiny as their action. Only players on that ship, except for the captain, participate in the Vote.

Only the bottom section of the Vote card matters in a Mutiny and contains either a Skull or a Helm. If a majority of the revealed cards have a Skull, then the captain on the mutinying ship is marooned to Tortuga. If a majority have a Helm or there is a tie, nothing happens.

Two Vote cards in the game have two symbols in each section. Each symbol is counted towards the Vote total.

Example: Two Vote cards are revealed in a Brawl. One card has 1 British flag and the other special Vote card has 2 French flags. The French team would win the Brawl since it is 2 flags to 1.

If a pawn on a ship gets marooned to Tortuga, pawns ranked behind it on the same ship will move up to fill in the empty pawn position. If the Captain is marooned, the First Mate becomes Captain.

If everyone on a ship has been marooned, the treasure that is on that ship remains on that ship in the same treasure holds. That treasure still counts towards a team's total treasure unless it is moved later in the game. If a player boards an empty ship, they become Captain of that ship.

If you are marooned to Tortuga, your pawn is placed at the back of the line on Tortuga. For example, if Tortuga is currently empty then the "back of the line" is the Governor's position.

For another example, if Tortuga already has 2 pawns on it, the "back of the line" is the "3" position. While on Tortuga you still get turns and you may still perform player actions as normal.

Second, one of your Vote cards is chosen at random by another player and placed unseen at the bottom of the Vote card deck. You will play with fewer Vote cards for the rest of the game.

If you are marooned multiple times while on Tortuga, you will lose multiple Vote cards. If you lose all of your Vote cards you may still call for a Vote if in a position to do so but you will not be able to participate.

Moving to a Rowboat takes one action. Therefore, it takes two total actions to get from Tortuga to a ship or from a ship to Tortuga, since you must move to the Rowboat as one action, and move to the ship or Tortuga as the second action.

If there is a pawn currently on a Rowboat, no other pawn may move onto that Rowboat since each Rowboat holds only 1 pawn at a time. If your pawn is on a Rowboat, you do not participate in Votes. Y

ou are allowed to "sit" on the Rowboat and perform other actions (e.g., viewing and revealing cards) in order to block other pawns. If you are marooned while on a Rowboat, you must return your pawn to the back of the line on Tortuga, but you do not lose a Vote card.

As soon as the Event deck runs out and the only unrevealed Event cards left are the 5 in the row, shuffle those 5 cards and lay them out in a new row. The Spanish Armada card will be one of those final 5 cards and revealed cards will no longer be replaced.

Immediately when the Spanish Armada is revealed, the team with the most treasure wins the game. You can win with your team regardless of where your pawn is when the game ends.

In games with an odd number of players, if teams are tied when the Spanish Armada card is revealed, the Dutch player wins.

Do not shuffle in cards that are currently in front of a player, such as an Albatross, Letter of Marque, or a Treasure Map. Lay out 5 new Event cards in the row and continue playing where you left off. The first team to take the lead wins the game.


This game is about knowledge and communication. Revealing Event cards at random may hurt your team so it's often in your best interest to use an action to view the cards first, or to rely on the knowledge of a trusted ally.

You can also use your team's knowledge to force an enemy to reveal harmful cards and suffer the consequences. If your team is in the lead, it may be to your team's advantage to go through the deck quickly so that you can end the game before the other team catches up.

A big part of the game is managing the Vote cards in your hand so you don't get stuck using a card that works against your strategy.

Players may look through the discard pile at any time. A player may use their own paper or device to keep track of where viewed cards are in the line of Event cards (Tortuga 1667 is not a memory game!).

While you are encouraged to communicate verbally with others in the open about where certain Event cards are located, you may not pass notes, devices, whispers, or texts to share information.

As soon as an action is stated, Event cards are pointed to, a Vote card is played, or a pawn is let go of, there are no take-backs (unless house rules mercifully dictate otherwise).

Below you will find clarifications about each Event card and some advanced optional rules for experienced players. If you'd like, you may begin playing and read the rest as needed.

Remember, when the Spanish Armada card is revealed, the team with the most treasure wins the game! 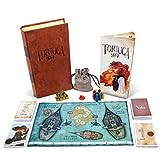