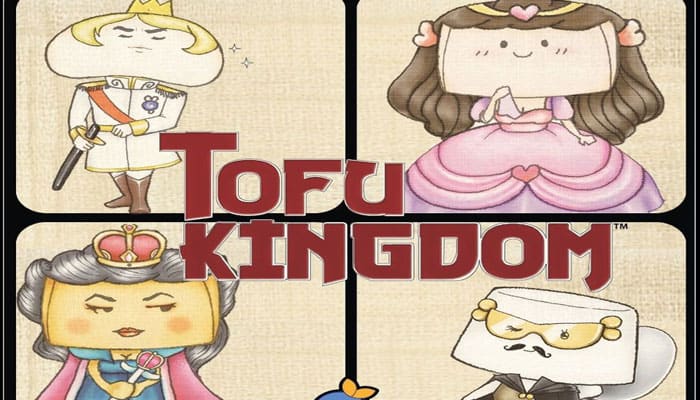 One at a time, players take turns acting as Prince Mochi and are allowed to ask one question to each player around the table.

The other players must answer Prince Mochi with the truth or a lie, depending on the character role they have taken on for the round.

The youngest player is the first to be Prince Mochi. They take the Prince Mochi coaster and place it in front of them. For the remainder of the round, they are referred to as Prince Mochi.

Prince Mochi then takes the coasters indicated on the next page, depending on the total number of players (there will always be one extra coaster to play with, except in an 8 player game).

He mixes them up, and distributes them face down to each player. The extra coaster is placed face down in the center of the table. The coasters not at play are put aside and will not be used for the rest of the game.

The Soybean Tokens are placed in the center of the table and will be used to count points.

Prince Mochi may only ask players one of these three questions:

Players must answer Prince Mochi's questions according to the symbol in the top right corner of their Character Coaster.

Soybeans are awarded based on the winning symbol in the top left corner of the coaster that Prince Mochi turned over (thinking it was the Princess).

There are 3 possible symbols:

Players look at the symbol that is found in the bottom right corner of their coaster. If it matches the winning symbol, they are awarded one soybean.

If Prince Mochi guessed correctly and found the princess, revealing the Heart as the winning symbol, he, Princess Tofu, and Tofu Chef are all awarded one soybean.

If Prince Mochi guessed wrong and turned over a coaster revealing:

Depending on the number of Character Coasters at play, one, several, or none of the players may be awarded a soybean at the end ofa round. All players keep their soybeans as points from round to round.

Once all the rounds have been played, the player with the most points wins the game.

If there is a tie, the players share the victory.