The idea behind the game is to offer a shared central framework for an entire range of adventures. Once you've learned these general rules, you will be ready to handle a new scenario and begin a new adventure without any issues.

Neither one or the other - or rather both! Our first desire was to capture the feeling of the roleplaying games of our youth, but in a more compact and less time-consuming format as the era of self-contained campaigns in bomb shelters is unfortunately over ...

T.I.M.E Stories is therefore a narrative game. Each player has the chance to take possession of a "receptacle", a character from the visited world, and is free to give it the dose of "role" they want. In the end, what matters is the story told and lived, in the game as well as around the table.

But it's also a board game in the modern sense of the term, with its actions and movements subject to a set of rules that allow reflection and optimization. So, even if chance still plays a role during a game, it's possible to play "well", but you can also play "badly" - and pay the price for it!

The scenario contained in this box is fully cooperative; the players work together against the game, which will lay many traps and puzzles. It's a group experience, and you will succeed or fail together.

In time, it's not impossible that a breeze of dissension will blow over the team, but for the moment, you're safe from that...

In this box, you'll find all of the materials required to play T.I.M.E Stories, as well as a pack of cards, called a "deck". Each deck is an entire scenario, a mission that your agents have to successfully complete to receive the congratulations of your instructor, Bob Lyfen.

Each new deck you purchase follows these same basic rules and is supplemented with a few details that will be given to you at the start of your mission while at base.

In all cases, Do not open a deck until you are about to start playing a scenario!

When you discover a new scenario (and thus a new deck), it is possible that it will be divided into multiple packs of cards (unlike the scenario deck offered in this box, Asylum).

In that case, without looking at the cards in question, simply stack the packs to form a unique deck (by placing them in the given order: pack 1 on the top, pack 2 directly underneath it, etc)..

Since the story, the receptacles, the items, and the riddles of a mission are contained in the cards of a single deck, it's extremely important that you learn to manipulate the cards with care while precisely following the given directives.

Otherwise, you might deprive yourself of some of the essential aspects that give the game all of its flavor: the surprise, the discovery, and the resolution of riddles.

Each player chooses a receptacle in the usual way. Then, choose a third receptacle together. The game plays using the rules for 3-players.

For the third receptacle, players take decisions together and they both read the cards. When rolling dice or in case of a disagreement, the current Time Captain takes priority.

Don't forget that T.I.M.E Stories is above all a game of communication. The more numerous the players, the more entertaining the experience!

In case of a contradiction between two rules, the following rules are applied: 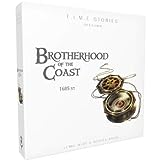