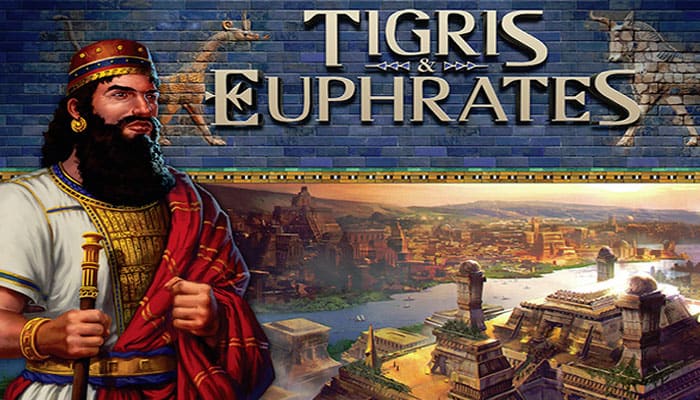 1. Set the game board

Place the game board in the play area. Use the standard game board, which has a gold-rather than blue-border. The other side of the board (which has a blue border) is used for the advanced game.

Place a temple tile on each of the ten board spaces marked by a winged beast (called a "Shedu"). Then, place a treasure token on top of each temple.

Put all of the remaining civilization tiles into the bag and shuffle them together. Then, place the four unused treasure tokens back into the box and all monuments near the side of the board.

Finally, divide all of the victory point tokens by color and place them by the board.

Note: Players are identified by their symbols, not by colors. Everyone uses all four colors.

Choose a starting player at random by placing all of the players' unification tiles with the dynastic symbols facedown on the table, mixing them, and then picking one. Play will proceed in a clockwise order.

The goal of each player is to develop all four of the key spheres of civilization: settlements, temples, farms, and markets. To do this, players will position their leaders, create and extend kingdoms, build monuments, and resolve conflicts. They will thus gain victory points in each of the four spheres.

Players will build, unite, and destroy kingdoms during the course of the game. They are fundamental tools in the development of everyone's civilizations.

A region is any area on the game board covered by a lone tile (e.g., a temple) or two or more linked tiles. Regions do not contain leaders. At the start of the game there are ten distinct, one-tile regions.

A group of one or more linked tiles and at least one leader together is called a kingdom. A kingdom can contain several leaders. It does not matter whether they belong to the same player or different players.

Kingdoms grow when leaders and tiles are added to the board. Kingdoms can be united and separated. As long as a kingdom contains only leaders of different colors, everything is peaceful.

Conflicts arise when there are two like-colored leaders within one kingdom.

There are four different actions an active player can resolve. The two actions that players will resolve most often are positioning leaders and placing tiles. Through these two actions players will build kingdoms and gain victory points.

Additionally, players are allowed to replace tiles from their hands and, twice per game, they can alter the game board by playing a catastrophe tile. Below is a list of the possible actions the active player may resolve during his turn. The active player may choose two different actions or the same action twice.

After a tile is placed, a few other events may occur: conflicts, monument building, or treasure distribution. These events are explained in detail later, and the action during which they occur is not finished until the event is resolved.

Each player possesses a dynasty of four leaders: a king, a priest, a farmer, and a trader. A player may only position his own leaders.

A leader can either come from outside the board or be repositioned from another space on the board.

Furthermore, a leader can be withdrawn from the board. Leader placement must obey the following restrictions:

No victory points are gained for the positioning of leaders. A player cannot gain victory points without first having at least one leader on the board.

A player will have six tiles behind his screen at the beginning of his turn. Players use these tiles to extend regions and kingdoms, strengthen leaders, and gain victory points. To place a tile, a player takes a tile from behind his screen and places it on the board according to the following restrictions:

When placing a tile, it can be placed adjacent to another tile, leader, or in isolation (i.e., adjacent to nothing). After a tile is placed, it cannot be relocated.

Most of the time, a player will gain a victory point when a tile is placed. The victory point is always the same color as the placed tile.

There are four types of victory points; each one is colored to correspond to a specific tile as follows:

A victory point is gained for placing a tile under the following circumstances:

No victory point is gained if:

At the beginning of the game, each player receives two catastrophe tiles. A player can use them to permanently occupy and negate spaces on the board.

When played, the catastrophe tile remains on the board for the rest of the game. It creates a blocked space that cannot be used again.

A player can place catastrophe tiles on an empty space or on top of an existing tile (which is then removed from the game). The only restrictions are as follows:

A player may take up to six tiles from his hand and return them to the box facedown. Then, he refreshes by drawing the same number of tiles from the bag and adding them to his hand.

Discarded tiles are permanently removed from the game.

If a player replaces tiles as his first action, he can use the new tiles to carry out his second action.

End of a turn

A player's turn ends after he carries out his two actions (or if he chooses to end his turn before taking both available actions). If one or more of his leaders are linked with monuments, he may gain additional victory points.

Finally, he refreshes his hand of tiles by drawing from the bag so that he ends his turn with six tiles in his hand.

If other players have fewer than six tiles at this point, then they also refresh their hand of tiles. Then, it is the next player's turn.

Treasure distribution can be initiated when a player positions a leader or places a tile.

At the beginning of the game, ten treasure tokens are placed on the first ten temples on the board.

Treasures are gained in the following way:

If a kingdom contains more than one treasure at the end of a player's action, the trader in that kingdom must gain all but one of these treasures. If there are treasures on a special border space, the player must take treasures from those spaces first; after that, he may choose from which space to take his remaining treasures.

If there is no trader in the kingdom, the treasures remain there until the kingdom has a trader.

Example 4: The Lion player places the farm tile. First, the Bull player receives a crop. Then, the Lion player takes the upper treasure because the trader in the kingdom belongs to him.

He has to choose this treasure because it is on a space with a special border.

The game ends when either of the following conditions are met:

At this point all players lower their screens. Each player determines in which sphere they possess the fewest number of victory points, with each player freely allocating his treasures to any sphere(s).

The player whose lowest sphere has the highest number of victory points is the winner.

In the case of a tie, the tied players compare their second lowest spheres, and so on. If multiple tied players are evenly matched in all four spheres, those players share the victory.