You take on the role of investigators trying to discover ancient knowledge -secrets beyond beyond the grasp of time ... beyond the grasp of the human mind. You will contact mysterious cults, explore hidden locations, encounter horrific creatures, and learn unspeakable words.

The horror of this knowledge may prove too much to bear for their weak minds, and some of you may be lost forever to madness!

The goal of Tides of Madness is to score the most Victory Points (VP), earned by developing your knowledge of the Ancient Ones during the game. You must, however, beware the madness! If you have 9 or more Madness tokens (

). Some cards will also give you Madness (

). After the third round, if both players survive, the player with the most VP (


Anatomy of a Card

Every card has a name 1 and an ability 2. Most abilities are scoring objectives that will reward VP 3 if the conditions are met at the end of each round.

There are 3 cards for each of the 5 suits 4: Races

Additionally, there are 3 cards without a suit. Beware, 8 of the cards feature Madness

Shuffle the cards and deal 5 to each player. These cards form your starting hand. Place the rest of the cards aside, face down, to form a draw pile. Keep the pencil, notepad, and tokens within easy reach.

The game is played over 3 rounds in which both players will draft cards and at the end of each round score VP.

Each round comprises of following phases: Drafting, Scoring and Refresh.

This phase consists of three steps that are repeated five times in the following order:

After all 5 cards have been played and revealed, perform the scoring steps in the following order:

Scoring example: At the end of the first round you have the following cards: Nyarlathotep, Azathoth, Dagon, Pnakotic Manuscripts, and Elder Things.

Your opponent has: Yog-Sothoth, Cthulhu, Hastur, Mountains of Madness, and Shub-Niggurath.

) and your opponent receives 1.

You choose to take 4 extra

since you are not in danger of succumbing to Madness.

for your cards, plus another 4

for receiving the most Madness tokens in this round, for a total of 27

The other are worth no points.

(skip This Phase In Round 3)

Perform the following steps in order:

Round 2 is the same as the first round with the exception that you start with 1 card already in play, and at the end of the round you will score all 6 cards.

In Round 3, you will start with 2 cards in play and score all 7 cards. There is no refresh phase in the third round.

There are 18 cards in total: 3 for each of the 5 suits, plus 3 without a suit. 8 cards also feature Madness. Most cards provide a scoring condition that will reward you with VP if you meet the condition.

Having the majority in a suit means that you have more cards than your opponent in that particular suit (ties do not count).

Detiled description of some cards:

16. Miskatonic University (no suit) with @Madness

: For each majority gain 4

. These points are added to any points gained from other cards that reward you for a specific majority.

17. Shub-Niggurath (no suit): Double the

18. Dreamlands (no suit): This card has a wild suit. You decide the suit of this card before scoring each round. Additionally, take one Madness (

) from your opponent after checking who received the most Madness this round (step 2. of the Scoring phase). This Madness token counts towards your total Madness.

After scoring the third round, if neither player has not lost to Madness, the player with the most VP wins.

In the rare case of a tie, both players share the victory ... and the defeat, of course. 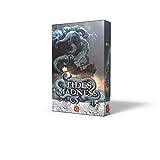