In Red Dragon Inn, you and your friends are a party of heroic, fantasy adventurers. You've raided the dungeon, killed the monsters, and taken their treasure.

Now you're back, and what better way to celebrate your most recent victory than to spend an evening at the Red Dragon Inn. You and your adventuring companions will spend the night drinking, gambling, and roughhousing.

The last person who is both sober enough to remain conscious and shrewd enough to hold onto his Gold Coins wins the game. The "Other Rules" section is mainly clarifications that you may not need during your first game.

If you have played before, please read "The Characters" and review the "Other Rules" section, since a few of the rules may be different from what you're used to. â€¦ 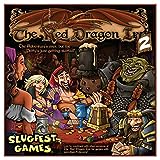 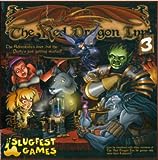