The Quacks of Quedlinburg Fan Site Once every year, the city of Quedlinburg holds a 9-day bazaar within its city walls.

Smelly feet, homesickness, hiccups and love problems-these charlatans have a unique cure for whatever ails you.

During the game, players draw from their ingredient bag in the hopes of creating the best potion.

The better the potion, the more coins that you will have to buy superior ingredients. But be careful: a few too many of these special ingredients and the whole pot could explode!

So do you press your luck hoping for that magic elixir, or do you play it safe in the hopes for bigger gains and more valuable ingredients later? That is for you to find out.. .maybe the hard way. So stockpile your most valuable ingredients and get brewing; your next potion might be the best one yet!

In The Quacks of Quedlinburg, players are charlatans - or quack doctors - each making their own secret brew by adding ingredients one at a time. Take care with what you add, though, for a pinch too much of this or that will spoil the whole mixture!

Each player has their own bag of ingredient chips. During each round, they simultaneously draw chips and add them to their pot. The higher the face value of the drawn chip, the further it is placed in the swirling pattern. Push your luck as far as you can, but if you add too many cherry bombs, your pot explodes!

At the end of each round, players gain victory points and also coins to spend on new ingredients to add to their bags. But players with exploded pots must choose points or coins - not both! The player with the most victory points at the end of nine rounds wins the game.

The Quacks of Quedlinburg Game Rules The last person to cook something goes first. The start player then shuffles the Fortune Teller cards and puts them face down into a draw pile in front of them. Now put the Scoring Track in the middle of the table.

The Almanac of Ingredients

You do not have to read through all the ingredient books. You only need to read the sets that are in the game, and only when new books are put onto the table.

Bonus: None. A 1-chip in the pot has no particular function other than filling the pot by 1 space. It is the least expensive chip in the game. 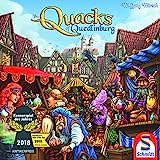 The Quacks of Quedlinburg