Each player may have any number of Fable cards in their hand at a time, but may only play one per round along with their Gather card during the Gather phase. Once a Fable is revealed, it tells you when it activates and what it does.

Fables usually provide a special ability once and are then discarded

Next Turn - A Fable with this symbol has an effect that takes place during the following round. After playing, place the card on the bottom of the Gather Location Boards so it is visible by all players.

It is important and polite to remind all players of the Next Turn effect at the start of the next round.

Take 2 resources of your choice from one opponent at your Location.

Monster! For each player at the Big Bad Wolf 's Location, you must select one of their Wood or Straw Houses ( if they have any partially or completely built ); return that house's top-most section to the Supply.

Monster! Choose one player at a Location with your Bridge Troll.

That player must give you half of all the resources they Gathered this turn ( rounded down ).

If you are at a Location with a Monster, you may move to a different Location of your choice, once per turn only. If no Monsters were played this round, draw 1 Fable card.

If you are alone at your Location, you may take 1 randomly select- ed Fable card from each other player's hand.

Choose one player and peek at their face-down Gather card. If you wish, you may then change your Gather card.

All opponents must shuffle all of their Gather cards ( including the one they had played ) and randomly play a new one. Your opponents may peek at their new random Gather cards, before resolving any remaining Fable cards.

If you are alone at your Location, place this card on your Player Board, where it becomes one extra Build Site. Each House section you build on this site costs 1 less resource to build than usual.

All players at the Dragon's Location must discard all resources from their Player Board.

Next Turn! At the start of the round, place this card onto one Location of your choice. At the End of the Gather Phase, all players in this Location gain any 3 resources of their choice from the supply. Discard at the end of the turn.

If you are alone at a Location, draw 4 Fable cards. Keep 2 of them and discard the rest.

When Revealed, End of Gather Phase. Unique Location! When revealed, play it to a Location of your choice. While Grandma's House is in play, any played Monster must be sent to this Location. At the End of the Gather Phase, all players in this Location gain any 2 resources of their choice from the supply. Discard at the end of the turn if there are any Monsters in its Location.

Choose a Location where no player Gathered this turn ( if there are any ), and take half the resources from that Location ( rounded down ).

All players ( including you ) at your Location gain 2 resources from the supply of one type produced at that Location. ( If the Location is the Market, each player may choose their own type. )

When Revealed, Next Turn Next Turn!

When revealed, you must either pay any 2 resources to the supply, or immediately discard this card. If you pay the 2 resources, then next turn double the amount of resources you Gather by taking a matching amount of the same type from the supply.

If you are alone at your Location, gain 2 extra actions during this round's Build phase.

When Revealed, End of Gather Phase. Unique Location! When revealed, play it to a Location of your choice. At the End of the Gather Phase, any player who is alone in this Location gains 1 of each resource from the supply. Discard at the end of the turn if there are 3 or more players in its Location ( or both players in a 2p game ).

Any Monster card played this turn immediately comes into your hand before it is placed or resolved. These Monster cards have no effect at all in the current turn but may be played normally by you later.

If you are alone at a Location, Gain a Friend card from the deck. Follow the normal rules for gaining Friends.

Night At The Tavern

Draw 1 Friend card per player, pick one for yourself and then distribute the rest to the other players randomly. All players ( including you ) must discard their current Friend ( if they have one ) and accept the new Friend.

All opponents who share your Location must shuffle all of their Gather cards ( including the one they had played ) randomly select one of them, and immediately move to that Location. ( If they select their current Location, they simply stay there. )

When Revealed, End of Gather Phase

Unique Location! When revealed, play it to a Location of your choice. At the End of the Gather Phase, any player who is not in this Location must discard 1 resource of their choice from their player board. Discard at the end of the turn if there are no players in its Location.

If there is at least one opponent at your Location, look through the Fable discard pile and take any 2 Fables of your choice into your hand.

All opponents who Gathered 5 or more resources this turn must give you 2 of those resources. ( If they gathered more than one type, they may choose which types to give you. )

Gain 1 Fable card from the Fable deck for every player ( including yourself ) at your Location.

End of Gather Phase. Choose one opponent and give them up to 3 of one type of resource. That opponent must give you the same number of resources of one different type ( of their choice ) in return. You may only choose an opponent who has enough resources (of a different type than the one you are giving ) to complete the exchange. You may choose to exchange zero resources.

Without looking at them, swap any 2 face-down Gather cards before they are revealed. Continue as if the players had played the swapped cards. ( At the end of the round, players take their own Gather cards back. ) Players whose Gather cards were swapped may peek at them once they have been swapped, before resolving any remaining Fable cards.

Wolf ~ Before Collecting Resources Monster! If there is at least one player at the Wolf 's Location, discard all resources from that Location before any player can collect them. 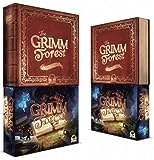