Unlimited Wealth (to discover the game)

It is possible to gain more than 40F. Whenever you have more than 40F, take four 10F Checks and start your disc back at the beginning of the Wealth Track.


First Come, First Served (for beginners, or for a slightly faster game)

When welcoming travelers, the first player does not decide in which room to lodge each of the travelers who arrives, but instead lodges them according to the order in which they arrive: The first traveler goes in Room #1; the second in Room #2; etc.

The solitaire game is played the same way, with the following exceptions:

You lose the game if you have any unburied corpses either during a Police Investigation or at the end of the game.

Your goal is to get the best score you can. In a long game, check your rank according to your score: 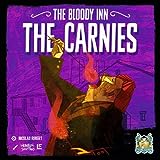 The Bloody Inn: The Carnies