One player leads a party of hunters and lumberjacks. The other player leads foxes and bears. The two parties hunt each other. There are also ducks and pheasants, which are hunted by both parties.

At first, all of the tiles are face-down on the game board. The person whose turn it is flips one face up - or makes a move using one of the tiles that is already face up.

The player who has bagged the most prey by the time all the tiles have been turned face up is the winner.

The person whose turn it is may select one of two options for their turn:

If you want to turn over a tile, select any of the tiles that are still face down on the board and flip it over. You are not allowed to change the orientation of a tile (or rotate the tile) in the process of turning it over (see illustration).

These are the rules for moving tiles:

For the tiles you are allowed to move, you can move only in a straight-line direction and only through empty tiles. A fox, hunter, duck, or pheasant can move across as many empty spaces per turn as the player desires, as long as it is in a straight line.

Yyou are not allowed to move back and forth in consecutive turns. In other words, a player who moves a tile in his or her color in one turn cannot move that tile back to the original space in his or her next turn.

If one player turns over or moves a neutral green tile, the other player is not allowed to move that tile in the next turn.

The goal of the game is to capture the opponent's tiles and neutral tiles. Each character must follow specific rules:


Capturing is achieved by moving to a space on which there is a tile that you can capture and want to capture, you don't have to capture it if you don't want to.

A captured tile is taken from the game board and placed face-up in front of the player who captured it.

As soon as the final tile has been turned over, the next player begins the final phase of the game.

From this point on, each player has exactly five turns. The players count the number of remaining turns out loud.

In the final phase, there is another way to get points in addition to the usual capturing options, now, the player may move tiles in his or her own color out of the four forest exits (indicated by the dirt paths in the middle of each side) according to the normal rules of movement.

These tiles also count as winnings and are added to the others in the final point calculation.

The game ends prematurely if all tiles have been turned over and either player no longer has a tile in his or her color on the game board.

At the end of the game, each player adds up all the points for his or her tiles. These are the point values for each type of tile:

Each player records his or her point total and the total number of tiles he or she captured in the round.

To make sure the game is completely fair, the players switch roles and play another round. After both rounds, add up the point totals from both rounds.

The winner is the player with the greater overall number of points.

In case of a tie, the winner is the player with the greater total number of tiles from both rounds. 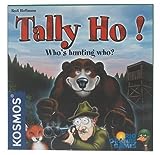