Such & Such Game Rules Be the first team to score 30 points!

Teams will try to solve a set of 5 clues. All of the answers have two parts. For example, take a look at these clues and answers:

On your turn, take a card from the box. Start the Timer and begin reading the clues in order from 1 to 5.

Your teammates all play at the same time and say their answers aloud. They may say as many answers as they wish, but the answer is not correct until one player has said both parts to the answer, back-to-back.

For example, if the correct answer to a question is "black & blue", one player might say "black", while another says "blue".

Each of these is part of the answer, but one player must put them together and say, "black & blue" for the answer to be correct. The answer "blue & black" is also acceptable... order doesn't matter.

If your teammates are stumped, they may opt to pass and move on to the next clue.

You may not move on to the next clue until you have either gotten a correct answer to the previous clue, or your teammates have said, "Pass".

Once a clue is passed, your team won't get another chance to come back to it.

You must stop reading when the Timer runs out. Your whole team should be quiet, because any answers given after time runs out are scored by the opposing team.

While the playing team is playing, the opposing team has two things to do: handle the Pawns and watch the Timer.

One player keeps track of the Pawns. If the playing team answers the first clue correctly, remove the Pawn from the #1 position on the Scoreboard.

If the playing team passes on a clue, leave that corresponding numbered Pawn in its position on the Scoreboard.

Watch the Timer and make a joyful noise when it runs out.

Leave any remaining Pawns in their positions on the Scoreboard.

Now you have a chance to steal any passed clues, and any clues that were not answered before the time ran out.

The same reader from the playing team should read aloud the passed and unanswered clues, which are indicated by the Pawns left standing on the Scoreboard.

The opposing team should answer aloud or pass right away. Use your discretion as to a reasonable length of time, and remember you'll be given equal discretion when it's your team's turn.

Each team scores a point for each correct answer given while either playing or stealing. Keep track on the Scoreboard.

If your team is first to reach 30 points when both teams have had an equal number of turns, you win!

You don't have to stop at 30, play as long as you like. Stop at any point when both teams have had an equal number of turns... highest score wins. 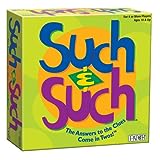