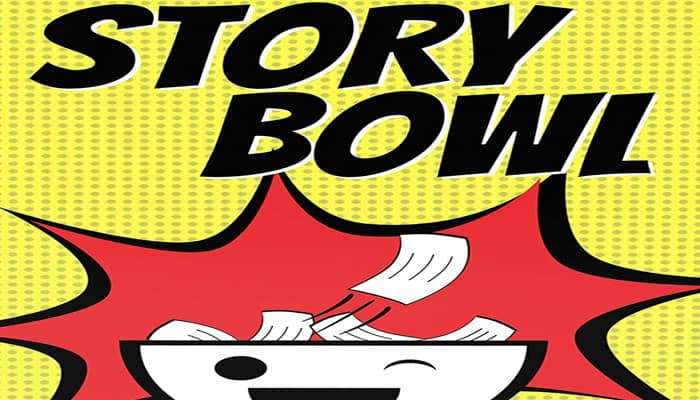 Your team's goal in Story Bowl is to guess as many 3-word micro-stories as possible.

Each round, you'll give clues to guess the same 18 micro- stories. Guessing will get easier as you remember each micro-story, but clue-giving will become harder each round!

Round 1 is speaking, Round 2 is silent acting only, and in Round 3 you can only say one word!

Deal the prompt cards and paper among the players. It's ok if some players end up with one more than others.

For each prompt card a player has, they write down a 3-word micro-story on the corresponding paper then add it to the bowl, (ex: For the prompt "A time you were injured" you might write the words "knee bicycle scrape")

Split up into two teams. It's ok if one team has an extra player.

Teams alternate taking 60-second turns. During each turn, one due-giver gives verbal clues to try to get their team to guess as many micro-stories as possible before time runs out.

The clue-giver can say anything that isn't part of the micro-story (ex: "joint in the middle of your leg" for "knee", "vehicle you pedal" for "bicycle", etc).

Their team has to say ALL 3 WORDS on the micro- story (in any order) to correctly guess it. When your team guesses correctly you should set the micro- story aside from the bowl and quickly grab another micro-story. Try to guess as many micro- stories as possible during your turn. Passing is not allowed.

Important: If you pick up a micro-story but time runs out before you guess it correctly, put it back in the bowl immediately! Micro-stories must be correctly guessed to escape the bowl!

After each turn, the clue-giver should repeat the 3 words on each micro-story they guessed to help everyone remember. Then add the number of micro-stories your team got correct to your score on your scorecard.

Once the bowl is empty (every micro-story has been correctly guessed) the round ends.

Are we having fun yet? OK put all the same micro- stories back in the bowl! You probably remember some of the micro-stories, which will make guessing easier, so we're making clue-giving HARDER!

The rules are the same as in Round 1, EXCEPT instead of speaking to give clues, now you give clues through silent acting (charades) and turns are only 45 seconds long.

Last round, and the hardest! Use the same micro- stories again, but this round you can only say one word (that isn't part of the micro-story) to get your team to guess the entire micro-story.

Turns are 30 seconds long. Using gestures to act out the clue is cheating, but you can show your team how many of the 3 words they've guessed so far using your fingers.

After Round 3, the team that has guessed the most micro-stories wins.

If you have more time, play an extra round (see "Extra Rounds"). Once you're done playing, have everyone share the full stories behind their micro-stories!

Want to keep playing? After Round 3 add one of these additional rounds with a 20-second time limit: