The Civilization Cards of Stone Age

A player keeps all cards which he acquires on his player board until the end of the game.

All cards are divided into two parts:

Top: The player takes the item shown on the top immediately when he takes the card.

Bottom: The player scores what is shown on the bottom during final scoring.

During the final scoring, each player multiplies the number of different card by itself and adds extras.

There are 16 cards with green background, with 8 different culture symbols, twice each. And there are 20 cards with a sand-colored background.

Upper Part - Used During The Game 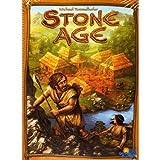