Break the deadlock in the final days of war. Victory will hinge on the actions of a handful of men - and we women spies... Go head-to-head as you secretly select soldiers with different abilities to engage the enemy.

Each of you will have the opportunity to sabotage your opponent's missions - using careful deployment; clever deduction and surprising deception.

With every enemy soldier you identify, with every advance you rebuff, you'll tighten the noose, infiltrating further into the enemy camp and taking the Double Agent a step closer to capturing the enemy flag!

Spies & Lies is played in 3 rounds. Each round consists of 3 phases (Deploy, Intel and Mission) which will determine which player can move the Double Agent into enemy territory on the game board.

The first player to land on the enemy's flag with the Double Agent wins (or the player who is closest to doing so when the third round ends).


A game, ready to start should look like this:

The game is played in 3 rounds, with each round representing a day. Each day consists of 3 phases:

Each place one Soldier card from your hand face down below each of your 4 Mission cards, as shown.


Your soldiers' ranks (1-10) must always increase from left to right, with the exception of the Sergeant (4) who can be placed in any position (to surprise the enemy and make deduction more difficult).

You may always look at your cards during the round. For more details about each rank and their capabilities,.

Correct: all cards are placed in rank order

Incorrect: the Miner (3) is out of sequence

Correct: the Sergeant (4) may sit in any position

Incorrect: the Bomb (7) is out of sequence

Turn over the top Intel card so it sits face-up on top of the Intel deck. This is the current Intel.

Each player must now place an Intel token on each of their Mission cards that correspond to a Soldier whose rank number is shown on the Intel card, with the exception of the Sergeant.

Flip or spin the Starting Player card to decide who'll begin the first round (players then take turns when it's time to start rounds 2 and 3).

If you're starting, try to work out which Soldier sits in your opponent's Mission 1 position.

Use the clues shown by the sequence of numbers on the Intel card, the quantity, and placement of Intel tokens lying on the Mission cards, the identity of the exhausted soldier, and try to figure out your enemy's strategy.

Call out your guess of that card's rank (its number or title) then flip over that Soldier card. Your opponent now takes a turn to identify which Soldier sits in your Mission 1 position.

Then it's your turn to identify your enemy's Mission 2 Soldier and so on until all Soldiers have been revealed.

Each time a Soldier card is revealed, record your score as follows:


I guess your Scout (2) is on mission 1. The blue player did not identify the red Soldier on mission 1 correctly, so the red player can move its red Infiltration marker 1 step forward and receives (in the case of the Spy) a Deception token.

Any leftover Infiltration points you scored with a soldier or from identifying the enemy card are lost. There is one exception: the Colonel can carry points over.

Now advance the black Double Agent from its current position by the same number of spaces as shown by the Day Marker (one space on Day 1, two spaces on Day 2, etc)., always moving in the direction of the enemy's fort.

If on a later turn you are still on the wall and get to move the Double Agent, you can make the decisive step and capture the enemy's flag to win the game.

Note: You can have any number of successful infiltrations per round (by reaching '10' on the track several times). The Lieutenant (5) and General (9) have the special ability to advance the Double Agent immediately.

During the Mission phase of your opponent's turn, you may choose to play a Deception token. Place it on the Soldier your opponent is about to identify, before they make their guess.


The blue player did not identify the red Soldier on mission 3 correctly, so the red player can move its red Infiltration marker 4 steps forward earned for the activated Sergeant (4) and an extra 4 for the Deception token. If you reach 10, any excess infiltration points are lost.

After using the Deception token, it goes out of play (regardless of whether it was guessed correctly or not). A player can win an extra Deception token if their Spy is activated but may not hold more than 2 at any point in the game.

Soldiers and Their Special Abilities

If your opponent fails to identify one of your Soldiers correctly, your Soldier is activated and can bring special abilities into play (either immediately or later in the round).

This can earn you valuable Infiltration points and perhaps the chance to move the Double Agent. Check the chart below to see what happens with each type of Soldier:

The round ends when all the Soldiers in the Missions have been revealed.

Each player picks up the 4 Soldier cards that they deployed during the last round, shuffles them face-down, and asks their opponent to pick one of the 4 at random.

(If you activated your Bomb during the round and also correctly identified the next enemy card, pick two cards for your opponent to place in their exhausted pile in the next round instead of one).

Spies & Lies can be played in teams, with up to two players on each side: separate the Mission cards into two groups with one team member playing Missions 1 and 2, and the other Missions 3 and 4.

Each player is responsible for choosing their own Soldiers and engaging with their respective opponents. Teammates can freely talk about strategy, but they cannot whisper, and they can't look at the Soldier cards (or reference card) at the same time while deploying.

After one player has chosen the cards for Missions 1 and 2, their teammate may view them only once to maintain correct card order.

Other than this, neither teammate can look at the other's cards. (This means that the first teammate will not know what is in Missions 3 and 4). 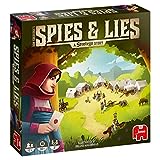