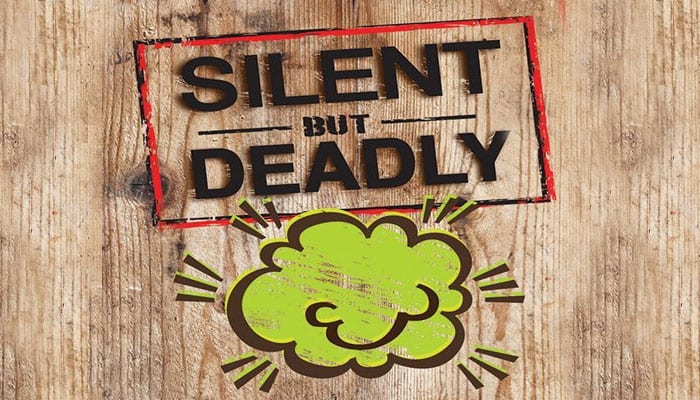 The object of the- game is to be the first player to discard all his cards.

There are 10 different types of farts in the deck. Each fart type has four colors (blue, yellow, red, purple).

There are additional special-play cards. Silent But Deadly, Baked Beans and cabbage make players pick up extra cards. Light a Match negate the effects of the "Pick Up" cards. These cards will be better described later in the instructions.

The player with the "smelliest gastrointestinal issues" deals the cards. The player to the dealer's left plays first. Play moves clockwise around the table.

Deal 7 cards to each player. Place the remaining cards face down at the center of the table. This is the draw pile. Turn over the top card. This becomes the discard pile.

Players must discard 1 card onto the discard pile by matching the fart type or by matching the color on each card. Light a Match and Silent But Deadly cards are not color-coded, and can be played at any time.

If a player can indeed play a card, he must discard. The hoarding of cards for future play is not allowed. This includes Light a Match cards.

Players must say the name of each card (or make an appropriate sound effect) as cards are discarded. There is no penalty for forgetting to do so. If a player is unable to discard, he must draw 1 card from the draw pile.

When a player has only 1 card left, he must declare "low on gas" aloud before the next player discards a card.

If a player forgets to do so, when he attempts to discard his last card he is penalized 2 cards.

If a Cabbage card is discarded, the- player to the- left must draw 1 card from the draw pile before playing.

If a Baked Beans card is discarded, the player to the left must draw 2 cards from the deck before playing.

Note: After a player has picked up his 'penalty' cards, if he is unable to discard, he must draw 1 more card from the draw pile.

Light a Match cards negate the effects of the various "Pick Up" cards. These cards are not color-coded and can be played on any card. For example, if a player is required to pick up 7 cards but discards a Light a Match card, the player is not penalized and

play continues as normal. The- player who discards a Light a Match card must select a new color when play continues.

When a player has discarded all his cards, he is the winner All other players are losers, there is no second place!