See It! Slam It! Say It! Game Rules 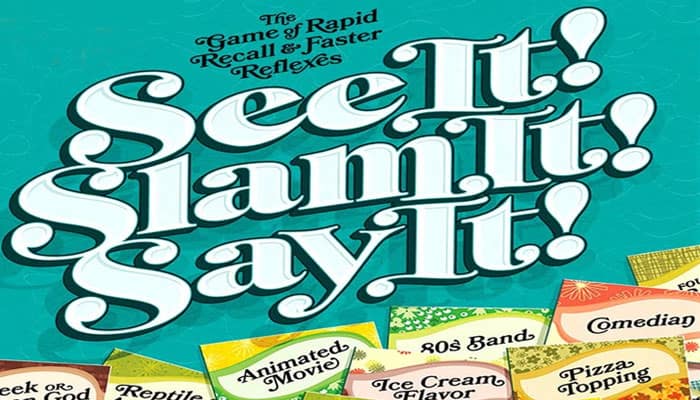 See-lt? Slam-lt! is a fast-paced card- slapping game where players must shout out words associated with pictures. There are three PICTURE cards showing at all times.

A LETTER card is flipped over, and players race to spot something that begins with that letter. See something!?!

Then quick... slam your hand down on the PICTURE card before someone else spots a match!

Place the PICTURE cards face down in a draw pile. Turn over the top three cards, and arrange them face up in the center of the table within easy reach of all players.

Place the LETTER cards face down in another draw pile.

Turn over the top LETTER card, and place it face up in a discard pile.

All players now race to spot something on one of the three PICTURE cards that match the LETTER card. A player who spots a match must quickly slap their hand on that PICTURE and shout out the word.

However, if two players slap different cards at the same time (and both players shout good matches) both players win their respective PICTURE cards.

Helpful hint: When you slap your hand on a card, also pull the card towards you. This prevents other players from also slapping their hand down on the card.

However, if another player believes that the word isn't an acceptable match, the two players involved (the player who shouted the word and the challenger) must debate whether or not the word should be accepted.

Then all players must vote to decide if the word should be allowed. Majority rules and tie votes go in favor of the challenger! If the word isn't accepted, simply continue playing (by turning over a new LETTER card).

Helpful hint: It makes the game smoother (and faster) to have one player replace the PICTURE card, while a different player turns over the next LETTER card.

If no matches can be found

If players are unable to think of a word beginning with a particular letter (and all players agree that they are stumped,) simply turn over the next LETTER card. Also replace all three PICTURE cards currently on the table with three new cards, and put the old cards to the bottom of the PICTURE card draw pile.

Not every letter in the alphabet appears on the Letter cards. Let's face it; there aren't too many words that start with the letter "X". Some letters appear more than once. Here is a summary of the letters used:

The game is over after all LETTER cards have been used. The player with the most PICTURE cards is the winner.

If kids and adults are playing together, we recommend that adults not be able to use colors. This makes it more challenging for adults to think of matching words.

If players notice that certain words are used too often (over multiple games), they can create a list of taboo words that cannot be used.

For example, you may want to make "HANDS" a taboo word, because most cards have hands pictured on them, and it may become an automatic response when the"H" card is turned over.

As players get more experienced, they may want to add more words to their taboo list. This will keep the game challenging and fun. The list of taboo words must be agreed to BEFORE the game begins.

If playing with younger kids, you can use six PICTURE cards (rather than three). This simply gives the players more pictures to look at, and increases the odds they find a match for the LETTER card.