Where is Mister X? Again and again, the renown criminal Mister X outsmarts the Scotland Yard detectives as they chase after him through the streets of London.

If he is able to escape them nine times, he wins the game. But, if the detectives manage to catch him three times, they will win.

First decide who will play the role of Mister X.

The opposing team (the detectives) always plays with two detective playing pieces, no matter how many players are in the team. The detectives receive:

Place your playing pieces on their respective starting positions, which are marked on the game board according to their respective colors. Different means of transportation lead to and from each station: underground (red line), bus (blue line), taxi (yellow line), boat (black line).

During the game, you move your playing pieces along these lines to the next station.

Have the success chips ready, and put any game materials not needed for the game back in the box. Now the chase can begin!

The game consists of several rounds. At the beginning of each round Mister X flees and is then chased by both detectives.

At the end of each round, you check to see if the detectives were successful by stopping at the same station as Mister X, or if he was able to escape.

In the role as Mister X, put on your visor to conceal any revealing glances. Pick up your four tickets in one hand. Then decide which station you want to go to next.

Take the appropriate ticket in your other hand and close your hand so that no one can see the ticket. You can also decide to stay where you are.

So that the detectives don't see which ticket you've chosen, keep your hands under the table when choosing your ticket. Once you've moved the ticket to your other hand, put your closed fist on the table in plain view; if you've decided to stay where you are, put your empty fist on the table.

Important: You can also choose a station where there are currently one or more playing pieces!

Example: As Mister X, you have five different options in the given situation:

Moving the detectives and Mister X on the Board

Once Mister X has decided where to go, it's the detectives' turn in any order. In the role as the detectives, you can decide together if you want to move your playing piece to the next station, or stay where you are. Where could Mister X be hiding now?

In a two-player game, both detective playing pieces are moved by the same player.

If you want to leave the current station, lay down your ticket with the selected means of transportation on the table and move your playing piece along the corresponding line.

Of course, you can also choose stations where other playing pieces currently are.

Did you catch him? Mister X shows what's hiding in his hand and moves his playing piece to the corresponding station. If his hand is empty, his piece stays where it is.

Mister X is at the same station as a Detective

He's been caught and the detectives get to put one success chip on an empty space of their chip board. The same also applies if both detective pieces happen to be at the same station as Mister X; only one chip is awarded.


Mister X is at a station by himself without a Detective

He's escaped and gets to put a success chip on an empty space of his chip board.

All players pick up their four tickets and the next round begins from their current position.

The game is over as soon as one of the chip boards has been completed.

In a four-player game, Mister X has an accomplice: Mister X Junior. Just as before, they try to outmaneuver the detectives while on the run.

Mister X and Mister X Junior play with the blue and black pieces. They each receive a set of tickets and visor. They both use the same chipboard.

Before the round begins, both Mister X players decide where they want to go. As before, they can also choose to go to stations that are already occupied by other players; only once the round is over do you check if Mister X has been caught.

Also for a four-player game, only one success chip is awarded per round:

As before, the game is over as soon as one of the chipboards has been completed.

You can also take turns at being Mister X or a detective. 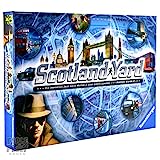