You are an artist competing with fellow artists to create the most beautiful stained glass window in the Sagrada Familia. Your glass pieces are represented by dice, which have a color and a shade - indicated by the values on the dice (the lower the value the lighter the shade).

Each round, players will take turns drafting from a pool of dice, placing these dice on their window.

Players must place them within the color and shade restrictions on their Window card, and never have adjacent dice of the same color or value.

After 10 rounds, players score points based on public and private objectives - the highest scoring artisan is the winner!

1 Shuffle the Private Objective Cards (Gray die on the back) and give 1 to each player face down. Players may secretly look at this card.

2 Give each player 2 random Window Pattern Cards and 1 Window Frame Player Board. Each player selects 1 of the 4 Window Patterns to play (front or back), the other card isn't used. +Note: Windows have varying difficulty from level 3 (easiest) to 6 (hardest) as indicated near the name. Difficult windows give more Favor Tokens

3 Give each player the number of Favor Tokens indicated by the difficulty number on their card.

4 Slide the selected Window Pattern Card into the bottom of the Player Board.

5 Place a Score Marker that matches the color of each player's board next to the Round Track, these are used during End Game Scoring.

A Place the Round Track near the center of the play area.

B Shuffle all of the Tool Cards and place 3 face up in the center of the play area.

C Shuffle all of the Public Objective cards (Blue die on the back) and place 3 face up.

E Randomly select a player to be the Start Player and give them the Dice Bag. One suggested method is whoever most recently visited a cathedral.

Set aside all remaining Objective, Tool and Window Cards, they are not used during the game.

Each game of Sagrada is played over 10 rounds.

Each round, the Start Player (the player with the Dice Bag) pulls dice out of the Dice Bag at random and rolls them. The number of dice pulled depends on the number of players (2 per player, plus 1 additional die):

Once rolled, these dice form the Draft Pool.

Beginning with the Start Player, each player takes a turn in clockwise order. On a player's turn, they may perform each of the following actions in any order:

Each action is optional - A player may choose to perform both actions, only one action or pass their turn taking no actions.

Turns proceed clockwise with each player taking a turn or passing.

Once the last player has completed their first turn, the round continues in reverse order (counterclockwise).

Beginning with the last player, each player takes a second turn (selecting a second die from the Draft Pool, etc).

Example: Mari takes her second turn 4, then Ben 5, then Emily 6 Once the Start Player has taken their second turn, proceed to the End of the Round.

When placing a die on a Window:

First die: Each player's first die of the game must be placed on an edge or corner space.

Every other die must be adjacent to a previously placed die, touching diagonally (different row and column) or orthogonally (same row or column).

Dice may never be placed orthogonally adjacent to a die of the same color or the same value. Example - Two red dice or two dice showing a 3 may not be placed side by side.

Players may choose not to draft a die during their turn.

Note: Any die may be placed on a white space as long as all the above restrictions are obeyed

Tip: Try to avoid placing dice next to a matching space (such as a 2 die next to a 2 space or red die next to a red space) so a future die can still be placed in that space

Players may spend Favor Tokens to gain a special ability from 1 Tool Card during their turn:

Players may choose not to use a Tool Card on their turn.

Tip: Being the first to use each Tool Card costs the fewest Favor Tokens. However, Tool Card abilities become more useful later in the game as player's Windows fill with dice.

All remaining dice are placed on the Round Track, covering the number space for the just completed round. If multiple dice remain (due to players skipping a draft action) these do not cover additional number spaces.

The Dice Bag is passed clockwise to the next player. This player is now the Start Player - players then begin another round.

Example - Ben is now the start player for the second round.

The game ends at the end of the 10th round.

Each player tallies their Victory Point total, gaining points from:

The player with the highest Victory Point total is the winner.

Ties are broken by most points from Private Objectives, most remaining Favor Tokens, then finally by reverse player order in the final round.

If a Player's Window is ever found to break any of the placement restrictions, that player must immediately remove dice (of their choice) from their Window until all restrictions are obeyed. These dice are out of play and any resulting open spaces will count against their score as normal. 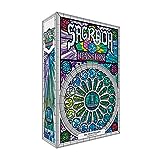