When there are 4 players, take the special "Arranging the Camp" card and place it on the board to cover the corresponding space.

Each time a player takes the Arranging the Camp Action, he either gets 2 Determination tokens or increases the Morale level by 1 on the main board.

Players randomly draw a Character card out of only the following three: Carpenter, Cook and Explorer.

When there are only 2 players, they have an additional Character - Friday. Take the Friday card and the white pawn, and place it near the main board. Take a Wound marker and put it on the leftmost field of Friday's life track. Friday is represented by a special white pawn and the First player decides how to use him. He can be assigned to take each type of Action:

Except for Friday's special rules described below, if you assign a player's pawn and Friday's pawn to the same Action, Friday is always treated as an additional pawn in such cases.

When Friday takes an Action, resolve it as if it was a player taking the Action, with the following exception: if you assign Friday as a single pawn to the Build, Gather Resources or Explore Action, one of the players has to roll the Action dice for Friday. If you roll an Adventure on the Adventure die, do not draw an Adventure card. Friday does not resolve an Adventure card but gets 1 Wound instead.

Friday is not a player, therefore:

If Friday gets any Determination tokens, he can use them to reroll any one die once per Action.

If you think that a Scenario is too diffult to accomplish, you can adjust the game for your needs in various ways:

Note! In the first Scenario, this would make the game harder.

If you are experienced players and believe that a Scenario is too easy for you, then you can adjust the game to be more challenging by:

During the setup, you can draw a random Wreckage card.

Apply all the standard rules with the following changes:

In case of a conict, the Scenario rules modify and should have priority over the general rules.

When a player has to resolve an effect due to any type of card (Event, Adventure, Mystery, etc). and he is unable to meet the requirements, he receives one or more Wounds.

When the effect of a card or a die roll affects all players and they cannot resolve it, each of them receives 1 Wound for each requested resource/token they were not able to provide.

There can only be one token of each type on each Island tile/space, Action field, Weather/Night space, etc.

When you are asked to discard an Invention card, simply shue it back into the Inventions deck. Note that the Carpenter's A new idea skill does not follow this rule.

Robinson Crusoe Adventures on the Cursed Island Board Game 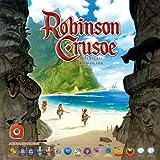