The Upper Midwest, early 19th Century: It is a hard life farming along the Upper Mississippi, but it is an era of innovation and expansion, and the technological advances in riverboat technology are expanding the opportunities that you have!

Not only are you able to increase the size and variety of your crops, but also able to claim contracts farther and farther down the Mississippi River. You can even hire agents who will work in New Orleans to sell your goods and advise you on business opportunities.

Careful use of your workers, gaining the favor of the harbor master, claiming opportunities when they arise, and keeping a close eye on your competitors will help you build an empire along the mighty Mississippi!

Riverboat posits each player as the owner of a 19th century farm on the bank of the Mississippi River. You need to organize your workers to ensure that the fields are ordered according to their type and harvested when ready so that the goods can be shipped to New Orleans.

In more detail, the game lasts four rounds, and at the start of each round players draft phase cards until they're all distributed.

The phases then take place in numerical order, with the player who chose a phase being the first one to act. In the first phase, players place their workers in the fields, with each player having the same distribution of colored field tiles, but a different random placement for each player.

In phase two, players organize their crops, trying to group like types together, with some fields requiring two or three workers. In phase three, players harvest crops and load riverboats, with a dock needing to be filled with all the goods of a single type before it can be loaded.

In phase four, the boats are launched and players can take special actions, with additional victory points possibly coming in phase five. Place the two game boards in the center of the playing area.

1 Sort the Riverboats by their capacities (numbers at the bottom) and effects (note that there are two versions of the 2 and 3 tiles) and set each pile face up alongside the matching boat art above the "New Orleans" board. Move the top tile of each pile onto the game board, placing it on the matching boat art. â€¦ 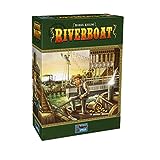