Set up the game normally with these exceptions:

Complete the chosen Solo Objective by the end of ten rounds.

The game is played according to normal rules but at the beginning of each Round in the Preparation phase, roll all of the Automa dice and place each die in these locations: 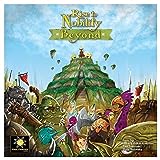 Rise to Nobility - Beyond