You are a nomadic, prehistoric people.

Throughout the game, you shall grow your tribe, move across the land, gather resources and lead your people to victory. As we know, all tribes really just want 15 points to rise above the rest.

Each player takes their turn going1 through the following 5 Steps, trying to score 15 points before the other tribes. Once a player reaches 15, they win immediately!

Jit the beginning of each turn, players score 1 point for every Village they have. Initially, players do not have villages, but their tribe may build them through the course of the game.

If doubles are rolled (two Suns, Moons, or Blanks), an Event is triggered.

The Action Board depicts 4 actions that players can perform on their turn:

Players will take 2 actions on their turn, and each action must be different.

To select an action, players allocate one of their rolled dice results onto the board at the top of an action's column. Each action is resolved entirely before the next die is allocated.

Add the number of tribe members indicated by the Action Board from your supply to one or more hexes that already contain your tribe members.

Example: If the action board indicates a growth of 3 tribe members, the red player here could add those 3 to any of the hexes they are in. They could split up the new incoming members between their hexes as shown.

Move up to the number of tribe members indicated by the Action Board from one hex to any adjacent hex. Neither terrain nor opponent tribe members affect movement.

Important: A single tribe member can only be moved once in a turn, and has a base movement of 1 hex per move.

Obtain resources from the hexes you occupy as specified on the Action Board. Forest produces wood, lake produces food and mountain produces stone.

Example: If the Action Board indicates 2 hexes produce 2 resources each, this player could choose both of the 2 lakes they occupy to produce 4 food total OR they could have the lake and forest produce 2 food and 2 wood, respectively.

Draw a number of Goal Cards as indicated on the Action Board from the top your Goal Deck and put these "in progress" on the left side of your Player Board, FACE UP. Your Goal Deck contains Developments (blue) and Achievements (brown).

Bonus Draw! You may recycle as many unfulfilled Goal Cards as you have villages BEFORE drawing. Recycled cards are put at the bottom of your Goal Deck and the same number of cards are drawn from the top of your deck - in addition to the cards indicated by the Lead action.

Add your die to the first die slot of an action, pushing1 all the other dice along to the right. The right-most die is then pushed down, and becomes one of the dice that will be rolled next turn.

The dice result on the action now determines the power of the action chosen.

All actions have a default benefit listed directly below the action name. This is the power of the action unless a certain set of symbols are present.

2 MOONS = If you see 2 moon symbols on the dice (any combination) then this is a low point for civilization! Not to worry, your tribe still claims a reward.

2 SUNS = If you see 2 sun symbols on the dice (any combination) then civilization is booming! You claim the highest reward for this action.

Conflict occurs in any hex or hexes that have more than 5 tribe members (of any color) immediately after the current player has resolved both of their actions in Step 3. If there is no conflict, go to Step 5.

Villages don't count towards the hex limit, only tribe members.

Multiple hexes in conflict are resolved in the current player's prefered order. The Current player is 'offense', and the other players are 'defense' for card purposes.

Acting simultaneously, each player removes 1 of their tribe members from the hex. This repeats until no more than 1 player's tribe members remain in the hex.

If conflict occurs in a hex with only one player's color, the conflict still occurs, and the player removes their tribe members until the population limit of 5 is reached.

If the current player has the Bow development card, they may remove one defending tribe member of their choice from the hex before continuing with conflict resolution.

If this takes the total number of tribe members down to 5 it does not stop conflict resolution. Bow development can't be used by defending players.

After conflict has been resolved in a hex, if there remains a village with none of its tribe members present, the village is removed.

Goal Cards are made up of Developments and Achievements. Players may complete any number of Goals (and score for each one) during this step.

Goals "in progress" are kept face up on the left side of the player's board (as shown), and then moved to the right side when completed. Once completed, points gained cannot be lost, and any abilities granted are for the rest of the game.

Developments cost resources and reward with action enhancements and a victory point.

Achievements are triggered by circumstances in the game (eg. occupation of hexes) and reward 2-4 victory points as indicated on the card.

Only applied when conflict happens on YOUR turn. The bow can be used in multiple conflicts.

This card is used in 3 or 4 player games only.

This can be any variety of resources. It does not count any resources gained from events.

The hexes that you need for this card does not have to match the exact pattern pictured.

Players are not required to fulfill a Goal Card even if they have met the condition.

The following Goal Card terms explain a player's positional status on any given hex:

At the end of their turn players may build any number of villages by spending the indicated resources on their tribe card and placing a village disc on a hex that contains their tribe members and no other village.

If at any point a player has no tribe members in the same hex as one of their villages, the village is destroyed. Each village awards one victory point to the player at the start of their turn (Step 1).

Villages have an additional benefit. When taking the Lead action a player may recycle one unfulfilled Goal Card for each Village they have.

When recycling, the player returns unfulfilled Goal Cards to the bottom of their Goal Deck and draws that same number of additional cards from the top of the deck.

All recycled cards must be returned to the bottom of the deck before any are drawn.

If a player rolls the same result on both dice, they trigger an Event (2 Suns, 2 Moons, 2 Blanks). The player then draws the top card from the Event Deck and places it in an empty event slot above the Action board.

If both slots contain currently active events, then no additional event is triggered and the player's turn continues.

When triggered, the event is immediately active. Event cards resolve differently depending on player action. Some cases are instant while others change or leave play when a roll of doubles occurs. When resolved, Event Cards are removed from their active slot into the event discard pile indicated.

After triggering an event and following its directions, the player continues with their turn.

The player can take any resource after entering a hex containing only opponents, DISCOVERY not just the one corresponding to that hex.

This event doesn't affect the board until the conflict stage of the turn it was drawn. For that conflict, and all future...

When placing Invaders, empty hexes may count as the least populated hex, with the active player breaking any ties.

A token is removed from the card whenever a player takes the GROW action, whether or not they grow the additional tribe members.

Players can draw extra resources for EACH TILE of that type they gather from (e.g., if Plentiful Wood is active and a player gathers from 2 Forest hexes, they would take 4 Wood from the card, in addition to the normal gather).

Players can only pay a resource to get a goal card once per turn. They may complete the goal card during the same turn it was drawn.

When placing the Mammoth, empty hexes may count as the least populated hex, with the active player breaking any ties.

As soon as a player has reached 15 victory points, they have immediately won the game! There are no additional turns - it's up to YOU to take your tribe to 15 points first!

If a player is eliminated (i.e., all tribe members removed from the board), they start their next turn by placing two tribe members on a hex of their choice, unoccupied if possible. 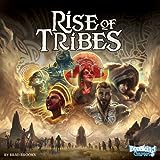 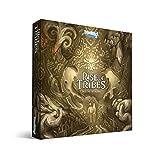