Note: Scandinavia may not be entered; therefore it has been "blackened out". (No slight to Scandinavia is intended; the region is considered to be part of Northern Europe in game terms).

Each region contains a "standard" (banner) with two victory point values. In addition, each Era-I region and Era-II region contains a symbol. If you control a region at the end of a game turn, you receive benefits based on the region's symbol: additional player (population) cubes, gold, resources, or food.

Note that North and South America in the New World do not share a common border.The Mediterranean Sea region has no connection to the Black Sea.

You mark each of your actions and its type on the action display. You mark your position in the progression of play on the turn order track-i.e., who goes first, second, and so on in a game turn.

Finally, you mark your accumulated food points on the board on the food track.

You have a player aid card that includes the sequence of play and a list of all progress tiles in the game.

These cubes are used to occupy regions on the world map and to fight battles.

There are 40 territory tiles. Each depicts one of the various types of terrain. In general, for each of your territories, you earn player cubes (or some other benefit) and you either earn or lose food.

There are 36 city tiles. For most city tiles, you must pay the tile's cost in gold when you acquire it (see the number in the top left corner of the tile).You earn victory points for each of your cities (as noted on the tile); however, a city may also cost you food and/or resources.

Note: The color of each tile corresponds to an era of the game. In addition, each city tile is further classified as being initially available in either the "A" turn or the "B" turn of its era.

The large number in the top half of the tile indicates how many different valid regions you may place cubes into when using that empire tile.The "ratio" of cubes at the bottom is used during battles.

You can place resource discs on the trade track to earn income or victory points.

You can earn gold in several different ways during the game. You spend gold in order to conduct certain actions.

There are 45 action discs.

You have 9 in your player color. You use 6 of them to mark your actions on the action display.

You use 1 on the victory point track, 1on the food track, and 1 on the turn order track.

There are 5 alliance pieces.

You use your alliance piece to mark an alliance with another player after picking the Diplomacy progress tile (see the player aid card). 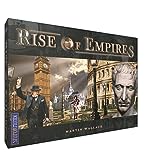