They may seem like an underwater paradise, but coral reefs are in fact perpetual battlegrounds - for space. In these crowded, frenetic communities, every individual, even the corals, have to fight for it.

Coral larvae drift through the open-sea floating in a soup of minute marine animals. When one of these larvae settles in a suitable spot and survives, a new reef is founded. It takes just a few days for a coral larva to change form and become a polyp. Identical copies then bud off and gradually a colony develops. Each separate polyp surrounds itself with a hard skeleton that can grow at a rate of up to fifteen centimeters a year.

Coral feed at night and each polyp uses its stinging cells to draw plankton into its mouth. None of the corals, however, could lay down their stony skeletons at the rate they do without help, as they simply could not acquire enough food to grow that fast.

The help comes from millions of single celled algae, called zooxanthellae, which live within the coral tissues.

Corals frequently overgrow each other - and that means trouble. When they get too close corals can detect each other chemically. The aggressor polyps then extrude their guts and simply digest their rivals alive.

Corals provide the basis on which the entire reef community survives. Many creatures live within the coral and some will even protect their coral hosts from attack, such as the shrimps in the game.

For others however the coral provides food. Parrotfish for example have jaws so powerful that they can bite through rock and coral alike in their quest for algae and, in doing so, play a large part in the erosion of a reef.

The consumed rock and coral will emerge later from the parrotfish as a fine sand which contributes to the tropical beaches we find so alluring.

Reef Encounter is about life on a coral reef! Using polyp tiles, players grow different types of corals, which they can protect from being attacked by other corals through judicious placing of their four shrimp counters.

To be successful players must consume polyps from neighboring corals in order to acquire the 'consumed' polyp tiles that are the key to the game. The consumed polyp tiles have a myriad of uses (and have a similar effect to the action points in games like Tikal and Java).

Most importantly they can be used to flip over or lock the coral tiles, which determine the respective values of the different types of coral at the end of the game.

Reef Encounter of the Second Kind 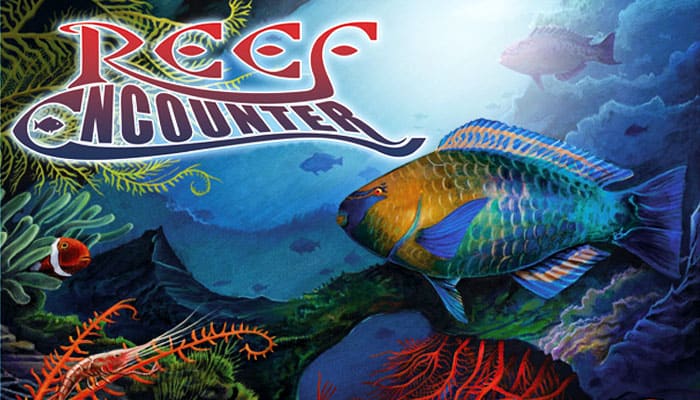 Reef Encounter is a game for two to four players. Once you are familiar with the rules, the game will last approximately 90 minutes.

In Reef Encounter the aim is to grow the largest and strongest corals on the reef and then to feed these to your parrotfish in the brief time available. Points are awarded at the end of the game for the number and type of polyps that your parrotfish has consumed.

Each turn new coral larvae drift into the game. Larva cubes allow players to play their polyp tiles onto the boards and create new and larger corals. Shrimps will then colonize these corals and protect the corals from attack. â€¦