The Mogul empire was a great empire that developed in the Indus-Ganges plain in North India. At the peak of its power (17th century), it comprised almost the entire India (as we know it today) and some parts of Afghanistan.

In 1858, the remaining part of the empire was occupied by the British and ceased to exist. A rich heritage of architecture, painting, and poetry shaped by Persian and Indian artists have been preserved to the present day. The empire was named after its rulers, the Great Moguls.

Also called 'Mogul' or 'Mogul Emperor.' The name probably came to Europe through the Portuguese (in Portuguese, Grão Mogol) who were the dominating power in the Indian Ocean territory at that time. The word Mogul is derived from the Persian mughul, which means 'Mongol,' referring to the fact that some Mogul's ancestor had married into the clan of Genghis Khan.

The most prominent Mogul ruler in history was Akbar the Great (reign: 1556-1605); he brought the empire to prosperity in military, political, and economic terms. Under Shah Jahan (reign: 1627-1658), the Mogul empire reached its cultural peak. At that time, the Taj Mahal, the Red Fort (Delhi), and the Shalimar Gardens in Lahore were established - all of them inscribed as UNESCO world heritage sites (in 1982, 2007, and 1981).

This game symbolically deals with the era from Akbar to Shah Jahan.


These are a few elements significant for the era of the Great Moguls or for the India of today that are showcased in the game:

A Hindu goddess that represents destruction and renewal. Her destructive power, however, mainly targets demons and the injustice of the world. Popular belief is that she can grant wishes.

Since 1963, the blue peafowl has officially been ranked among the national animals of India (besides the Bengal tiger and the Ganges river dolphin). Originally, it came from the Indian subcontinent where it is considered a sacred animal since it gives warning of tigers and severe weather and kills (young) poisonous snakes, among other things.

Whereas the western world often associates the peafowl not only with beauty but also with arrogance and vanity, Indians primarily consider it a symbol of regality and immortality. Therefore, peacock statues were prominently designed also on the throne of the Mogul emperors.

The Peacock Throne was a throne chair decorated with an abundance of pearls, gold, and gems (more than 26,000) that was manufactured by order of Shah Jahan and inaugurated in 1635.

The production took seven years and was said to have been twice as expensive as the construction of the Taj Mahal; this was considered very extravagant even for a Mogul emperor. Since the Red Fort (Delhi) was plundered in the 18th century, the Peacock Throne has been presumed lost.

The present coat of arms of India shows the adapted capital of an Ashoka pillar, the famous "Four Lions of Sarnath". Erected around 250 BC under Ashoka, the Indian ruler at that time, who had numerous monumental pillars set up during his reign at many strategic places, such as border towns and trade routes.

Their capitals were used to proclaim his edicts. Some of these then-numerous and widespread pillars have been preserved down to the present day. They are silent witnesses of the bygone Great Indian Empire whose cultural heritage has stood the test of time.

Raja Man Singh I was an important commander of the imperial armed forces. As a governor of several provinces, he had forest areas cultivated for agricultural progress, commissioned a variety of palaces, forts, and temples to be built, and was even engaged as a city founder.

Additionally, Man Singh I gained a high reputation for being a member of the Navaratnas, the "Nine Gems" of Akbar, a small group of extraordinary personalities at the Mogul emperor's court. 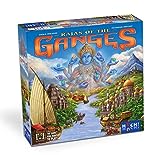 Rajas of The Ganges