All the rules are explained for a 4-player game. Any rule exceptions for a 2- or 3-player game will appear in blue boxes. If the game has fewer than 4 players, put any unused components in the game box.

Each Player should now have in their personal supply:

Play proceeds in clockwise order, starting with the First Player, with each player taking a turn. On your turn, you must:


The four available main actions are shown on your Player Board:

Note: This does not count as your action, so you then proceed as normal to take a Worker from your supply, place it on your Player Board, and perform the chosen action.

All the pieces (buildings and rails) are available during the game.

However, when one player completely clears all the sections of their Player Board to the left of their company logo (leaving no buildings and no rails), the game draws to a close, and the value of each company is calculated by means of Victory Points (VP).

The value of a company increases by completing Milestones, making progress on the Performance Tracks, having active trains, and contributing to the infrastructure of the telegraph network. The player with the most VP wins the game.

The different types of Worker, and their abilities are:

Main action: Build a Station in a City you are connected to

Take the leftmost building from your Player Board and place it on an available City of your choice (see below for Placement rules).

You must pay the cost indicated on the top of the City, and you may take the primary reward depicted on the right side of the City tile.

The primary reward is either advancing on the Performance Tracks or gaining one or two Workers (if there is the '/' symbol, it means you gain one of the two depicted Workers).

Note: For the cities of Washington and Charlotte, the City tile is printed on the Game Board.

Take the leftmost 2 rails from your Player Board, and place each of them in an available rail space of your choice (see below for Placement rules).

You must pay $400, plus an additional $100 for each 'Difficult terrain' icon (triangle) next to the spaces you build in. The color of the triangles is to help identify them.

If the space you are building in has the 'Plains' terrain icon, there is no additional payment.

Note: You have to place exactly 2 rails. If you cannot pay the cost for placing both rails, or you have no more rails on your Player Board, you cannot choose this action.

The only exception to this rule applies if you have just 1 rail remaining, in which case you can perform the action, paying the full cost ($400 plus additional payment for the terrain, if any) as usual.

Some rail spaces are marked with a Deal icon.

After you have completed your action in full, if a rail was placed in a space with a Deal icon (regardless of whether it was the first rail placed in that space), the current Deal tile is resolved.

Note: If you place rails in more than one space with a Deal icon during an action, only one Deal tile is resolved.

Connection to the Western Union network meant, in turn, that the railroad companies could offer telegraph services to the communities that sprang up along the railway lines. This is represented in the game by placing a building (Telegraph Office) in a section of the Telegraph line.

Take the leftmost building from your Player Board and place it in an available section of the Telegraph line depicted on the bottom of the Game Board (see below for Placement rules).

Immediately take the primary reward of that section: Gain the amount of Telegraph Shares indicated by the brown number in the section you placed in.

Note: Taking the bonus does not remove the Telegraph tile; it remains for the whole game allowing anyone who builds an Office in that section to use it.

Reminder: You can never have less than 4 available Workers at the end of your turn

Two of the Telegraph sections include a Deal icon.

After you have completed your action in full, if an Office was placed in a space with a Deal icon (regardless of whether it was the first Office placed in that space), the current Deal tile is resolved.

Main action: Sell off a company asset to gain money.

On the top of your Player Board, there are buildings and rails stored in 8 different sections. Each section has an amount of money depicted above it.

Gain the money indicated above the section from where you took the piece.

Note: You can only sell 1 piece per action.

Before or after you have made the sale, you may flip one of your Train tiles. If the train is face-up, you receive the bonus depicted on the front and then flip it face down.

If the train is face-down, flip it face up. You don't take any bonus for this, but your train is now ready to be used again.

Note: At the end of the game, each face-up Train tile that you have is worth 8 VP.

As the rail and telegraph networks expanded, entrepreneurs who were interested in gaining a stake in the burgeoning telegraph businesses would offer to act as subcontractors; recruiting specialists and carrying out work on behalf of the railroad company in exchange for shares in the telegraph company.

After you have completed your action in full, if a rail or an Office was placed in a space with a Deal icon (regardless of whether it was the first rail or Office placed in that space), the current Deal tile is resolved.

Note: Even if you place rails in more than one rail space with a Deal icon during an action, only one Deal tile is resolved.

Each tile depicts two possible deals, each offering a reward and costing 1 to 4 Shares. Accepting a deal means discarding the requested Shares and taking the corresponding reward.

Company milestones are your company's growth targets. As your company grows, it will need workers to manage your extended network of rails and stations. Your company has a policy of promoting from within, so you need to ensure that there is a steady flow of recruits to replace the workers who become managers.

To complete a Milestone, you need to fulfill the depicted conditions and to promote some of your Workers into Managers. At the end of the game, each completed Milestone you have is worth the VP indicated in its top left corner.

Promoting a Worker means to move it from your supply or your Player Board (even the one that you just used to perform the main action) and place it on one of your company Milestones.

Note: It is not necessary to have fulfilled any of the conditions on the Milestone before placing Workers on it.

Once placed, the Workers on a company Milestone are now Managers, and no longer considered available (you cannot use them to perform actions).

They cannot be moved nor removed until the Milestone is completed, at which point they are discarded (see below).


You can promote a Worker:

Reminder: You can never have less than 4 available Workers at the end of your turn.

To complete a Milestone, you need to have the depicted Manager(s) on the tile, and have fulfilled the depicted conditions.

At the end of any turn (after any Deals have been resolved) in which you complete a Milestone, discard the Manager(s) back to the common supply and flip the Milestone tile face down.

When taking a replacement Milestone, draw the 3 top tiles from the appropriate stack, choose one of them and place it face up next to your Player Board.

Put the remaining tiles on the bottom of the appropriate stack. If you complete both your Milestones in the same turn, replace them one at the time.

Variant: For a more strategic game, instead of drawing the top 3 tiles from the appropriate stack, look through the whole stack and choose any one of them.

There are 3 Performance Tracks on the right edge of the Game Board.

Your company's overall Performance is scored based on the position of your markers on the three Performance tracks.

VP are indicated at the left of each track.

When you gain an advancement on the Performance Tracks, move one of your markers up to the next slot.

If you gain multiple advancements, you can always split the total advancements among the different Performance Tracks.

If there is an icon of money with a minus sign, you must pay the indicated amount of money when your marker passes that point.

If there is an icon of one or more Shares with an arrow, you must discard the indicated amount of Shares when your marker passes that point.

If there is an icon of a Worker with an arrow, you must discard any one of your Workers when your marker passes that point.

When one player completely clears all the sections of their Player Board to the left of their company logo (leaving no buildings and no rails), continue playing until all players have had the same number of turns (i.e. to the player seated to the right of the First Player).

Then, each player takes 1 more turn and then the game ends.

Note: Milestones can be completed at the end of any player's turn, therefore any Deals resolved in the final round may still allow players to complete Milestones, even after they have taken their last turn.

Victory Points are then totaled using the Scoring pad, and the player with the most VP wins the game.

In case of a tie, the tied player with the most money wins (with Shares counting as $150). If there is still a tie, all tied players share the victory.

VP are scored for: 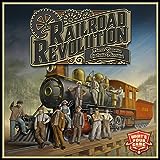 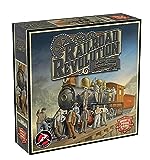 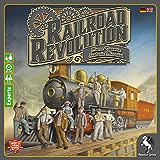