Players in Qwinto all play at the same time, with everyone trying to fill the rows on their scoresheets with numbers as quickly - and as highly - as possible in order to score the most points.

To set up, each player receives a scoresheet that contains three colored rows of shapes (mostly circles with a few pentagons); the rows don't completely overlap, but they do overlap enough to create five vertical columns of three shapes, with one pentagon being in each vertical row.

On a turn, a player rolls 1-3 dice, with the dice being the same colors as the rows: orange, yellow, purple. Each player can place whatever sum is rolled into an empty shape in a row that matches the color of one of the dice. Two rules must be followed when placing a sum in a row:

A player does not have to enter the number in a row, but if the active player, the one who rolled the dice, doesn't do so, then they must mark a misthrow box on their scoresheet. 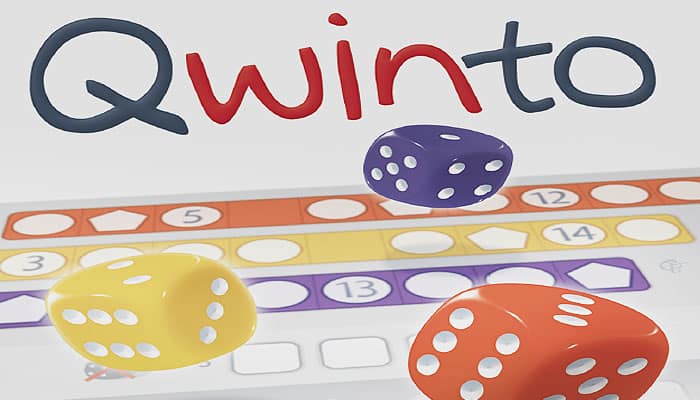 Players try to write down as many numbers as possible in the three differently colored rows on their respective score sheet. If you manage to enter a number in all the fields of a colored row, you'll score even more points for the row. There are also lucrative bonus points you can score for entering a number in each field of a column made up of 3 fields.

The order in which you enter the numbers in the colored rows is up to you. For example, you can first enter a number in the yellow row on the right, then in the middle of the purple row, and then on the left side in the purple row; then to the far right of the orange row, and then in the yellow row on the left side, and so one and so forth. When entering numbers you only have to follow these two rules: …