To Have Fun! Duh! Why else would you play a board game?

Okay, for those of you who require a little more 'structure', here ya go:Your goal is to get to the last space on the board (the one with the rocket ship on it).

You'll be rolling die, reading some cards,and generally acting outrageously foolish on your way there. Better buckle your seatbelt, it's gonna be a bumpy ride!

Shuffle each deck of cards and place them in an easy-to-reach place near the gameboard. Keep the die, timer, pencil and paper handy.

Each player chooses a game piece representing a character in Quelf and places it on the starting space..

Roll the die to determine who goes first. The player with the highest roll goes first and then play proceeds to the left.

It's easy to start playing Quelf

Simply roll the die and move your gamepiece ahead that many spaces. Draw the card that corresponds with the color space you've landed on,

Read the card aloud, and do what it says.If you land on a green space,the player to your right draws the card and reads it to you.

Each character in Quelf has their own personality that will shine through as you read the cards in the game.

The character you choose might affect the outcome of the game. If a card instructs your character to do something, you must do what the card says.

Read more about each character on the sides of the box and choose your character wisely!

Read each card aloud and simply follow the instructions on the card! Yeah, it's that simple.

Every card has a penalty number.Move backwards that number of spaces if you can't successfully complete the card or if you get the card's answer wrong. Timed Cards: When a card is a

use the timer to complete your task. Start the timer after you have finished reading the card.

When you draw a Classified Card read the card silently to yourself. When you have completed the card, discard the card without anyone else seeing it. Sometimes when other players peek at a Classified Card after it has been discarded, they might be in for a shock due to the QUELF EFFECT.

To win the game you must be the first player to get to the finish space and complete the final Scatterbrainz question.

Since you're trying to win the game, we've made it a little harder on you this time around. You have to give 2 answers while everyone else gives only 1 answer.

If you are not the player getting stuck with the penalty for the round, congratulations you just won the game!


What's up with all these Cards??

When you draw a ROOLZ card, the effect of that card doesn't just last for your turn. It may very well last for the remainder of the game!

Roolz cards are "rules" that you must follow as long as the card is in play, or else pay that card's penalty.


There are 3 types of Roolz cards:


There are a couple of things to keep in mind with all Roolz cards in general:

If you fail to follow a Roolz card and nobody notices or says anything, then it looks like you just got away with it! So keep an eye on other players and their Roolz cards to make sure they're following them.

QUIZZLE is a traditional trivia category, except there isn't anything traditional about it! These questions range from the obvious to the impossible.

Remember, these are question cards, so the opponent to your right draws the card and reads the question to you. If you guess the answer correctly , you avoid the penalty!

STUNTZ cards will keep you on your toes^literally! Have you ever balanced your shoe on your head? How long can you go without blinking?

Have you always wanted to sit underneath the kitchen table? Well now's your chance!

You are on stage! SHOWBIZ cards will have you sing, dance,act,do impressions ,mime,write poetry,and anything else we find entertaining.Note:If mimes scare you,Quelf may not be the game for you.

A few notes about stuntz and showbizcards

If a card tells you to "Tell The Other Players To Guess",then you must get them to guess the underlined text on the card before the timer expires.

If a card tells you to do something that conflicts with a rule you have in play, ignore the rule until you are done with the card's activity.

If a card mentions an item that you don't have near you (i.e.Table, Shoes, Hat, Sunglasses, Mirror ,Fan, etc)., then improvise! Need a string for a particular card but you don't have any? How about shoelaces? If you can't come up with an alternative item,then you may draw another card.

Above all,play safe! Some Showbiz and Stuntz cards may require physical activity.If you are unable to safely perform what the card says,you may draw another card.

In SCATTERBRAINZ , everyone gets to play! When you draw a Scatterbrainz card,choose a topic (if you're given a choice) like 'Types of Fish' or 'Brands of Lipstick.'

Each player must give a valid answer, starting with you and proceeding to the left around the gameboard.

The player that fails to keep the round going,pays the penalty. 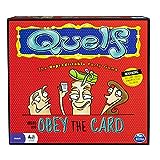 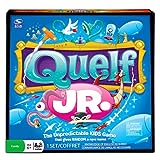