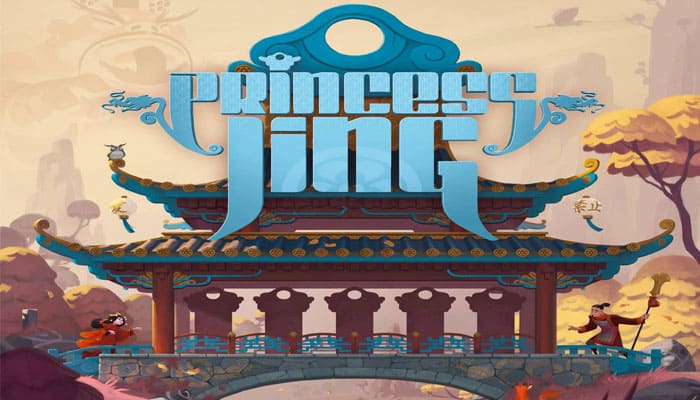 During the Ming dynasty, two princesses are kept in the Forbidden City of Beijing. Princess Jing and her sister Fang are promised to two aged allies of the Emperor, and have been prohibited to see any other men.

Ignoring the ban, they confide in two captains of the Imperial Guard and two idylls begin through the screens of their suite. Determined to win their freedom, they run away through the chamber of screens despite the vigilance of the magic mirror holders.

They can count on the devotion of their maids , dressed as princess , to deceive the guards . Only their crowns can betray their identity.

Princess Jing can be played in two game modes. I suggest you start with: "The Princesses Run Away!" to familiarize yourself with the basics of movement. Then try the expert mode: "Legendary Animals".

The Princesses Run Away

Princesses Jing and Fang are trying to run away from the Forbidden City to meet their beloved captains. Aided in their escape by their by their maids, the princesses must now race across the chamber of the screens undetected.

Beware of the magic mirror holders, they can unmask the princesses at any time!

Each player chooses a color and takes 5 empty screens. Then, each player inserts behind three of the five screens: the princess, the maid and one magic mirror holder.

Then, players proceed with the following steps:

1 They place 15 empty screens on the three central lines of the game board.

2 They secretly mix their 5 screens and place them, in the order of their choice, on the first line of the board facing them.

3 Finally, each player chooses one of his three captains and places him on the central position, at the entrance of the chamber of the screens, on the opposite side of the board. Then the youngest player starts the game.

Princess Jing is played over a series of turns. During a turn, a player takes the following steps:

A. Move a screen (Required)

The player must make one of the two movements:

The player exchanges the position of two adjacent screens, anywhere on the board.

This exchange can be done orthogonally or diagonally. However:

Place your Princess screen in a space where you feel that your opponent will play. This way, he might move your princess without knowing it!


Withdraw a princess or a magic mirror holder

The player withdraws the screen with his princess or magic mirror holder and exchanges it with a screen from his starting line.

This exchange always takes place with an empty screen.

The player proceeds as follows:


B. Point at an Opponent's Screen (optional)

Once the player finishes his move, he may point at one of the screens on the board to try to unmask the opposing princess. His opponent must then reveal the chosen screen to show if it hides the princess or not.


In any case, it is impossible to play more than 2 turns in a row.

When you spot the opposing' princess you do not have to point her out right away . Follow her path and use your knowledge at a better time for you, for example, when you will be I or 2 spaces away from victory.

The magic mirror holders are the best way to know behind which screen the opponent princess hides. They can be moved like any other screens and it is, of course, better to keep their positions secret.

Look into the mirror with discretion even if you need to do that often! Or your opponent will notice and discover your next move.

The first player who places his princess exactly in front of the captain who is waiting for her, wins the game.