Rather than the usual starting positions, players begin with one ship on the anchor square in their harbor and their two remaining ships on the two closest anchor squares next to Skull Island. This game can always be counted on for a lively beginning.

Add an extra die to your game for some unusually fast action. But if you roll a hurricane (three of a kind), you lose the ship furthest from your harbor. Batten down those hatches, sailor!

At the beginning of your turn, you may designate one of your ships as a nuclear device. Then, sacraficing that ship and forfeiting movement, both dice are rolled to determine the blast radius.

The low die is counted in all directions from your nuke's position to define 'ground zero.' Anything within this area is destroyed for the duration of the game, including all ships and treasure. A good lesson here.

The game begins with players stacking all three ships on the anchor square in their harbor. The stack may be moved as a unit, deployed into individual ships or restacked on appropriate dice rolls.

Low tide is the prevailing factor here. Instead of stacking or removing captured ships, they are flipped over and left in the space where they were captured. Such shipwrecks are impassable and bring an interesting new twist to plundering.

In this wild card variant, all usual rules apply, but when a player rolls a 1-2 combination (acey deucey), the player is allowed to use the roll to move, make up any roll and move, then roll and move again. Do you feel lucky today?

Dominion is truly a strategy game in which two players each control an alliance of six ships from the ports of one tradewind against the ports of the other.

Dice rolls are used to move any of six ships in the alliance, but the treasure must be returned to the harbor of the ship which transports it. The additional ships - and choices give a distinct advantage to players with skill and experience. Excellent payback for beginner's luck.

Likewise, runaway is a strategic alliance of six ships, this time between the ports at opposite ends of the tradewinds. However, the polar position of opponents distinguishes this game for strategy, tactics and hot dice. Full sail and away!

The empty harbor in this three player variant comes to life after the first player to lose three ships returns at the command of the lost fleet. The 'deadman' then starts anew with three consecutive rolls.

The idea here is to transport the treasure to your ally at the opposite corner of the board. The fleet moving first starts with a treasure ship on the anchor space in its harbor, led by its two other ships.

Treasure ships cannot move toward the harbor of their flag. If another player captures the treasure, they must move it to the opposite harbor to win. - Alan Hench, Austin TX

This requires two complete game sets. Place the boards together, joining them at the straits. Up to eight players take normal starting positions, and then a coin toss determines which board both treasures will be placed on.

The inside straits provide passage between boards at the center, and the outside straits allow passage from one side of the assembly to the other. And, oh yeah ...all four dice are used at once. 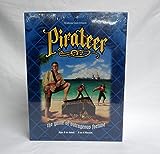