In the middle of the Caribbean, a mysterious island holds countless treasures. One stands out-the Golden Pineapple, the dream of every treasure hunter.

You have discovered this fabulous island! But your quest will be dangerous. Fearsome penguin warriors have lived here for centuries, protecting their treasures.

Dodge their attacks, avoid the traps, and face the terrible guardians of the Golden Pineapple! Then steal everything in your path and get back to the boat, safe and sound!

Survive your expedition to the Isle of the Penguins, and bring back as many treasures as you can grab in 15 minutes. The player with the most Treasure cards wins.

Each player receives 7 Life Point cards. Line them up in front of you, Heart- side-up.

Shuffle the Adventure cards. Deal them out fairly evenly to all the players, face- down. (It's OK if some players have one more card than others).

Place your Adventure cards in a face- down deck in front of you, without looking at them! Place the pistol and darts on the table, in easy reach of all players.

Stand the 2 targets (Space Penguin and Bear), the 2 Suspension Bridge bases and the Pirate Ship base in assorted locations 6 to 10 feet from where the game is set up, visible to all players.

Note: We recommend that you place a weight in the bases and targets, or assemble them with the tabs on bottom permanently attached (glued or taped).

Insert the CD into a CD player, or prepare the MP3 file. Do not start the music (track 2 on the CD) until all players are ready to begin.

The music is indispensable to Pingo Pingo. It determines the length of the game and guides play. The music has two different moods: Day and Night.

Some actions are only available during Day music and others during Night music. In addition, you will regularly hear (about every 30 seconds) a Cry of "Pingo Pingo!". This Cry resolves certain specific actions.

The CD contains two soundtracks, both downloadable from the games page on the IELLO website.

Track 1 provides an explanation of the rules and identifies the sounds. Sounds play in this order: a Cry, Day music, a Cry, Night music, and a final Cry. This way, everyone knows what to expect.

Track 2 lasts 15 minutes, and is played during the game. It starts with the sound of the oars of a boat at sea. As soon as the Day music starts, the game starts. When the music ends, and you hear the sound of oars again, the game is over.

Start Track 2 of the CD. As soon as the sound of the oars and footsteps stop, you hear the music and the game is on!

Starting with the oldest player, take turns revealing Adventure cards from your decks. On your turn, reveal the top card from your deck, and place it face-up in the middle of the table. This card triggers one action. As soon as this action is resolved, the next player to the left reveals a card, and so on.

Reveal cards as quickly as possible, without pausing between players' turns.

The game ends when the music stops, and you once again hear the sound of the oars.

How to reveal your cards?

Flip your card over toward the center of the table (not toward your- self) so that all players see it at the same time. Do it quickly so no one gets the jump on you!

Adventure cards can be one of three types:

Treasure and Camp cards have a white border. Event cards have an orange border. Each card requires a specific action when it is revealed.

A Treasure card represents a treasure on the island. These are why you came! Whoever has the most Treasure cards at the end of the game wins!

But beware! Some Treasure cards are trap- ped, and can make you lose Life Points. If you run out of Life Points, you lose.

When a Treasure card is revealed, check whether it is accessible.

If the Treasure is accessible (right time of day, and not trapped), be the first one to tap the card with your finger. Whoever taps first takes the Treasure card and places it face-up in front of herself to form a Treasure pile.

If the Treasure is not accessible (wrong time of day, or trapped), DO NOT tap the card. If you do anyway, the card stays in the middle and you lose 1 Life Point (turn one of your Life Point cards from the Heart side to the Skull side).

A Camp card works just like a Treasure card: If it is accessible (right time of day, and not trapped), you must tap it first. If it is inaccessible and you tap it, you lose 1 Life Point.

However, the reward is different: The first player to tap an accessible Camp card may steal up to 2 Treasure cards from other players. You can steal one card each from two different players, or two from the same player.

Place the two cards in your Treasure pile, face-up in front of you. If there are fewer than 2 Treasures to steal, you only steal as many as you can. Camp cards stay in the middle.

Event cards are encounters or adventures you have on the island. For the most part, these are dangers, but a few can help you.

When you reveal an Event card, you must perform a particular action.

As soon as you fail or succeed, the game continues with the next player revealing a card. Event cards stay in the middle.

If you lose your last Life Point, you are eliminated from the game. You lose all Treasures and must distribute them as evenly as possible between the surviving players, who place them face-down under their respective Adventure decks.

If only one player remains in the game, this survivor wins.

Otherwise, the game ends when the music stops and the sound of the oars plays. All players still in the game count up their Treasure cards.

But beware! You can only keep 3 Treasure cards per Life Point you have. You must discard any beyond that number.

Example: If you have 4 Life Points, and you took 15 Treasure cards, you can

The player who still has the most Treasures is the winner. 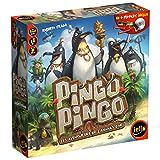 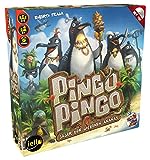