There are 3 game plays:

The last player left in the game is the winner.

To begin the first round, players draw two cards in unison from their Pig Piles and look at them.

If a player has drawn a pair from his Pig Pile, he immediately shouts "Pigasus!" and slaps his hand down in the center of the playing area.

If no one starts with a pair, players say "1-2-3 pass" and in unison pass one card from their hands to the player on the immediate left. Players place the card passed to them in their hands.

Whenever a player slaps the table, the other player's race to slap their hands down on top of his. The last player to slap, the one whose hand is on the top, receives the first letter of the word "Pigasus".

The round of play is now over. Every time a player loses a round, he collects the next letter of "Pigasus". For example, after losing four rounds, he would have a P-I-G-A.

Note: Keeping track of what letters each player has with a pencil and paper is helpful.

If more than one player has a matching pair at one time, all should shout, "Pigasus!" and slap down.

Players race to slap down on the hand of the player who first shouted "Pigasus!" and slapped down. As always, the last hand down gets a letter of "Pigasus" and the round is over.

After each round, players put the cards left in their hands into a common pile outside the playing area. This is the "Pig Pen".

Cards in the Pig Pen are no longer in use. Each player again draws the top two cards of his Pig Pile, and a new round begins.

A "Pig Out" occurs when any player uses up his Pig Pile. This player shouts "Pig Out", and the round immediately ends. No player may draw again, pass again or shout "Pigasus!"

All cards left in players' hands, all remaining Pig Piles, and all cards in the Pig Pen are collected, shuffled and re-dealt. A new round begins and play continues.

When a player has lost seven rounds, he has spelled the word "Pigasus". That player is out of the game.

Cards in his hand and his Pig Pile are put into the Pig Pen. Play continues with the remaining players.

The winner is the last player remaining after all other players have spelled "Pigasus".

Here are some extra rules for true game hogs:

The Bluff and Challenge Rule allows players to shout "Pigasus!" even if they do not have two matching pig puns.

When using the New Sign Rule, players do not slap their hands in the middle of the table when they have a pair of pig puns. Instead, the dealer decides the sign to declare a match.

After the cards have been dealt, the dealer tells all the players what they must do when they have a match (jump up and down, wink, scratch their heads, anything).

As usual, the last player to make the sign gets a letter of the word "Pigasus". A new player deals each time so everyone has a chance to invent a sign.

A fun, noisy game for 2 or more players.

Collect all of the cards.

The player to the left of the dealer goes first. He takes a card off the top of his pile and places it face-up next to his pile.

The player to his left does the same, and so on until each player in the circle has turned a card over.

This play continues with players turning up a card into their face-up piles.

If a player runs out of face-down cards, he can simply turn his face-up pile face-down and continue.

When a player sees that the top card of any two piles match, he shouts "Oink!" The first person to "Oink!" gets to take the matching piles. He adds them to the bottom of his face-up pile. Play then continues with the person to the left of the last player turning over a card.

When two players "Oink!" at the same time, the two piles that match are put in the middle and become the "Pig Pen".

When a player turns up a card that matches the top card of the Pig Pen, they can shout "Pig Pen!" and take the Pig Pen pile which he adds to the bottom of his face-up pile. Play then continues to the left.

If a player has called "Oink!" or "Pig Pen!" incorrectly, then he must pay the "Piggy Penalty", which is to give one card from his face-down pile to each player. Players may not look at the cards they get.

When a player has collected all of the cards, he is the winner.

Try "Speedy Oinker". In this gameplay, all players turn their cards at the same time instead of taking turns.


A fast-moving game for 3 or more players.

Players try to get all five cards in their hands to be the same. Each player must choose one of the five cards he was dealt to trade. Together, the players put that card face-down on the table and chant in unison "1,2,3, Run Piggy Run".

When they say "Run" for the second time, they slide the card to the player on their right and pick up the card that was just slid to them from the player on the left. This continues until one player has five matching cards in his hand.

When a player has five cards that match in his hand, the game is over.

The player places the cards face-down on the table and puts his finger on his nose. The last player to place his cards down must take a letter of the word "Piggy". Play then continues.

When a player has all five letters of the word "Piggy", they are the "Piggy" and must run around the table once, while oinking. 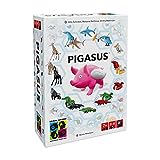