PicWits! consists of two decks of cards: Captions and Pictures.

Each turn, the current judge selects a caption (such as "Bad hair day" or "Say cheese!") and the remaining players select a picture card (from the 6 in their hand) that they feel best matches that caption.

The judge chooses a winning picture, and the player who submitted that picture wins the caption card.

The first player to win a pre-determined number of caption cards wins the game. PicWits is played in rounds. Every round needs a judge. The player who last used a camera will judge the first round. If there is disagreement, the youngest player will be the first judge. â€¦ 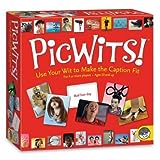