To be the first player to use all of their cards.

Shuffle and deal 25 cards to each player. Place the remaining cards in a draw pile.

Players place five of their cards out in front of them in a row (this is called the player's deck) and the rest are left in a pile beside each player.

Cards have an item on both sides, so players may want to look at both sides of the cards before beginning the game, to familiarize themselves with all the items.

When everyone is ready, the top two cards from the draw pile are turned over by the dealer and placed side-by-side in the center of the table.

The dealer starts the game by saying 'Go' and all players frantically place cards from their own player's deck on top of either of the two cards in the center.

But to do this, they must say out loud the connection between their card and either of the top cards on the center piles. Players must state the connection in a full sentence, and must include the name of both items in the sentence. Remember you can use both sides of the cards.

A spoon card played on a rolling pin card: "Spoons and rolling pins are both items from the kitchen!"

A red balloon card played on a red rose card: "The balloon and the rose are both red!"

A basketball card played on a coin card: "The basketball and the coin are both round!"


Players may only place one card on the center piles at a time. As players use cards from their player's deck, they replace them with cards from their own pile (of 25 cards that they were originally dealt).

If all players become 'stuck' and no one can find a linking image in their player's deck, the dealer turns over two new cards from the draw pile and play begins again.

If a player places a card without giving a credible link between it and the previous card on the pile and it is disputed by another player, all play immediately stops.

After discussing, the other players either decide to accept the connection, or penalize the player by giving them an extra five cards from the draw pile. However, if a player makes a 'bad' connection and another player plays their card before the connection is disputed, they have gotten away with it!

The following connections are not allowed:

If a player draws a wild card, they can use that card to automatically link to the card on either pile. The card placed directly on top of the wild card also links without any association.

The first player to use all of their cards wins the game! 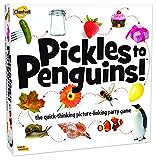 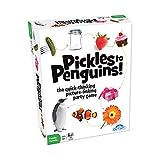