PICK TWO is the always-changing, ever- rearranging crossword game. Players draw letter tiles, building their own personal crosswords as fast as they can. Whenever players use all their letters they yell "PICK TWO" and everyone draws two more tiles.

The catch? These tiles must now be added to your crossword. The best part? You can always change your crossword by rearranging letters and even words to use up your tiles.

When the center pile of tiles is gone, the first one done wins the round.

The object of PickTwo" is to be the first player to use ALL your letters by building a crossword with the letter tiles.

The winner is the player with the LOWEST total score after 5 rounds of play. 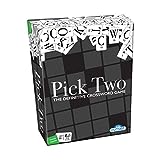