Several varieties of trees compete to grow and spread their seeds in the sunlight of this small, but fertile, forest. As each tree grows its leaves are touched by the sun's rays, collecting Light Points and casting shadows on the surrounding smaller trees. When a tree reaches the end of its life cycle, players win points proportional to the richness of the soil the tree was rooted in.

Using your light points, take your trees through their life cycles, from seedlings to fully grown. Then, collect Scoring Tokens with points proportional to the richness of the soil on which the trees grew.

A Set the main board in the center of the table.

B Give each player 1 Player Board, 1 Light Point Tracker, 6 Seeds, and 14 Trees: 8 small, 4 medium and 2 tall (matching the tree variety on their Player Board).

C Stack the Scoring Tokens in 4 piles (according to their shade of green and number of leaves) next to the board, in descending order so the highest scores are at the top of each pile.

D On each Player Board place 4 Seeds, 4 Small Trees, 3 Medium Trees, and 2 Large Trees on the corresponding open spaces. Then, set the Light Point Tracker on "0".

E Place the remaining 2 Seeds, 4 Small Trees, and 1 Medium Tree alongside each Player Board; these are the seeds and trees available to each player at the beginning of the game.

F The youngest player starts the game, making sure to take the First Player Token.

H Taking turns, players place 1 of their available Small Trees on a space of the external edge of the main board (the 1 leaf zone). Taking turns again, they place a second Small Tree. This will allow players to collect Light points during the first Photosynthesis Phase.

H Finally, place the Sun Segment on the sun symbol printed on the board (making sure there is enough space around the board to move the sun freely to each of the 6 positions). To keep track of the sun's revolutions, set the 1st, 2nd, and 3rd Revolution Counters on the edge of the board in numerical order. Unless playing the advanced version, leave the 4th counter in the box.

In Photosynthesis, the goal is to maximize tree growth in the time it takes for the sun to circle the board three times. Each time the sun is in one position, a round is played. Each round has two phases:


I. The Photosynthesis Phase

The player with the First Player Token moves the Sun Segment clockwise, to the next angle on the hexagonal board.

Note: this step is skipped during the first round of the game.

Light points are then counted based on the new position of the sun. Players get light points for each tree that is not in the shadow of another tree. Players add their light points to their Player Boards by moving the Light Point Tracker.

Light points accumulate from round to round, but a player may not have more than 20 light points at any given time. Any additional points earned are not scored, and cannot be used. Light points are scored as follows:

No points are scored for seedlings.

All trees cast a shadow onto trees that are the same size or smaller, on the side opposite the sun. A tree that is taller than a shadow-casting tree is not shadowed, and receives full light points. Trees in the shadow retain the ability to cast their own shadow, and trees may cast shadows on their own variety. The shadows are casted as follows, in straight lines corresponding to the arrows illustrated on the Sun:

Once all light points have been counted and scored, the round continues clockwise with whoever is in possession of the first player token. Players are then free to spend their light points on any number of actions, and can choose to exhaust their light points, or only use a portion of them (keeping those leftover for future rounds). Each player carries out all the actions they wish to do during their turn before it is the next player's turn.

Players can plant a Seed around one or more of their trees, using one light point per Seed. A Seed from the available area can be planted at a distance that is determined by the size of the tree from which it originates. You can plant a seed in any direction, including nonlinear directions, as long as the spaces connect.

Planting a seed activates the tree of origin's space, as well as the space the seed is placed on. Therefore during their turn a player cannot plant more than one Seed originating from the same tree. Additionally, they cannot grow a tree from one size to the next, and then plant a Seed using that same tree as its origin.

A seed or tree can be replaced only by a tree that is the next size up.

Players can only take new trees from their available area to grow seeds or trees on the main board. Trees and seeds that are removed and replaced from the main board are then placed on the Player Board, on the topmost available space. If no corresponding spaces are open, the trees or seeds are discarded into the box for the remainder of the game.

Players can choose to collect Scoring Tokens by ending the life-cycle of their Large Trees. To do so costs 4 light points per Large Tree.

The Large Tree is removed from the main board and placed on the topmost available space of the player's Player Board.

The player then collects the Scoring Token that is on top of the pile that matches the soil type of where the Large Tree was rooted.

Once a tree has been collected, other players are free to plant in that space during that round.

Reminder: All of the above actions, except buying, activate a space on the main board (meaning you cannot act upon it again during your turn).

After all players have taken a turn, the First Player Token is passed on to the next player, clockwise, and a new round starts with the Photosynthesis Phase.

When the sun has completed one revolution around the board, the top token of the Sun Revolution Counter pile is drawn and placed in the box.

The game ends when the sun has completed three revolutions around the board, and the last Sun Revolution Counter has been drawn.

A full game is 18 rounds, with the last round occurring at the 6th position of the sun (the one before the sun symbol printed on the main board). Players then count the points on their Scoring Tokens. They also add 1 point for every 3 unused light points (0-2 light points do not score any extra points).

Once the basic rules have been mastered and players are comfortable with them, you can try a more intense variation by choosing to apply one, or both, of the following rules: 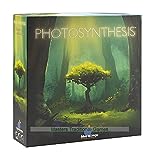