To be the player with the most cash at the end of the game after playing through one or more months.

As any financial advisor will tell you, the way to get ahead financially is to make Deals. It's the American way! So take advantage whenever you can.

The time will probably come when you don't have enough money on hand to buy a Deal-or to pay your bills, pay a neighbor, or make a charitable donation you are instructed to make. So do what any red-blooded American would do: Take out a LOAN!


The Mail Spaces and Cards

If you land on a MAIL space, draw the number of Mail cards indicated on the mailbox flag.

If instructed, act immediately; otherwise, keep them in a stack face up in front of you until you land on "Pay Day"-when you must pay your bills, and discard the Mail cards.

As soon as you draw this, pay a player of your choice the amount shown on the card, even if you're forced to take out a loan.

As soon as you draw this, collect the amount shown on the card from a player of your choice. That player may have to take out a loan to cover the payment.

Place the amount shown on the card on the corner of the board marked "Jackpot".

If you don't want to pay off the whole balance on Pay Day, you must pay the interest-l0% of the total amount owed-then you can carry the balance over into the next month.

Move to your choice-a Deal or a Found a Buyer space- and follow the instructions below.

Move ahead to the next Deal or Buyer space NOW


The Deal Spaces and Cards

If you land on a Deal space, draw the top Deal card. If you wish, you may purchase the item on the card immediately; take out a loan if you need to. Pay the bank.

At any one time, you may have as many Deal cards in front of you as you can afford, so if you're feeling flush, buy a Deal. Dipsydoodle Noodles, for example, will cost you $8,000.

Hold your Deal until you land on (or are sent to) a Found a Buyer space, when you may cash in the card for the increased value. The bank pays you. Dipsydoodle Noodles will get you $12,000-for a profit of $4,000!

You may sell only one Deal at a time, and the Deal card has no value if it's unsold when the game ends.


The Other Board Spaces

The Bank antes up $1,000, then each player may ante $100; it's not mandatory. Starting with the player who landed here, each player who anted in turn picks a different number from 1 to 6.

The player who landed on the Lottery rolls the die: The player whose number is rolled collects all the money. If no one had picked the number rolled, keep rolling until somebody wins!

Put the amount shown onto the Jackpot corner of the board. (If you don't have the cash, take out a loan).

Starting with the player who lands here, each player rolls the die. The first one to roll a 3 "wins" $1,000 from the Bank!

If you have one or more Deal cards and land here, the Bank pays you the "Value" amount on one of them (your choice) and you pocket the profit! Put the used card in the discard pile.

Every player gives you a lovely present: $l00!

Pay the Bank $100 x the number you rolled and take the Deal card that' s under the edge of the board-it' s yours! Replace it with a new one from the Deal deck.

All players except the player who landed here roll the die and place $100 x the number they rolled onto the Jackpot corner.

Any player who rolls a 6 on his or her regular turn collects the Jackpot! (A regular turn consists of rolling the die and moving your token). If you don't remember, you' re out of luck.

STOP! Stop here, even if you rolled a number that would take you past this space. Just like real life, getting paid has its advantages-and disadvantages. Here' s what you do in this order:

If you have reached Pay Day of the last month of play (according to the agreed-upon number of months), you retire from the game and wait for all the other players to finish. While you' re waiting, you may play the Lottery, Radio Phone-In Contest, Happy Birthday, or Walk for Charity, if one comes up!

When all players have completed the agreed-upon number of months, each player tallies his or her cash total. Obviously, you will be completely paid- up on all bills because you paid them off on Pay Day. Now subtract the amount of any outstanding loans. The amount you have left is your net worth.

The player with the highest net worth - the most cash - when all players have landed on Pay Day for the last time, wins the game.

For poor money managers: If all players end the game in debt (with bills or loans outstanding and no cash to pay them), the player with the lowest amount of debt wins! 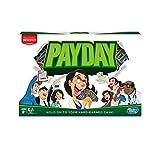